Attending a real football match once again: Beijing vs Shanghai

Football is one of the languages of the world, and when played well there is almost nothing as sublime and beautiful. Quite often it is not played very well though but there is still a rough and rugged aesthetic enjoyment to gain from those times. Especially if you’re a fan of the mighty Beijing Guo’an!

The top team from Koryo Tours’ home city have been mainstays in the Chinese Super League since the era of professionalism began in 1992. They (we) may have only won the league once, but that’s because all the other teams cheat and trick their way to victory. There can be no other explanation!

Some of Koryo Tours staff are regular attendees at the Workers’ Stadium for the home games of our green & gold heroes (that would be the kit colour that they wear) but this year has been a bit different for two main reasons. One is of course COVID-19, and the other is that the Workers’ Stadium was torn down and completely demolished a few months ago.

This stadium had stood since 1959, it was one of the Ten Great Buildings of Beijing too, but it was getting a little run down and now is going to be upgraded and completely rebuilt in the next few years. Until that time Beijing Guo’an will be moving to another smaller ground in Beijing – where we will continue to support them.

This year the Chinese Super League (CSL) has been played in two bubbles; one in Dalian, and one in Suzhou. These cities chosen as neither has a CSL team at present, but they both have two stadiums capable of hosting these matches. The league was divided in two and played as two mini-leagues, then for some reason the CSL bosses chose to play a kind of American sports style play-offs system for the final rounds, not something many fans have been happy about, but at least it is only going to be done this year. Our beloved Guo’an were tragically knocked out in the semi finals but went on to play in the third place play-off (an Asian Champions League place at stake!) against one of the only teams that are better than us on paper; Shanghai SIPG.

This two-leg match was taking place in Suzhou again and I realised this was the last chance I would get to go and see a match live this year. This time each club was given a mere 400 tickets to sell to their fans so I snapped one up (price fixed at 50 RMB, less than $10, a bargain!) and then headed to Suzhou (cost fo getting there and back? more than the usual cost of a season ticket to Beijing, but that’s the price of loyalty!)

Fans for this game were given instructions: show up at 6PM outside the north entrance of the Suzhou Gymnasium, pass through a health check, then all proceed to the stadium together. Bring ID, wear a mask, obey the rules.

The reality is that it was a bit more relaxed. I reported as ordered and a security guard asked me to scan two ‘health kit’ QR codes (one with WeChat, one with AliPay. He didn’t bother to take my temperature, and didn’t bother to check my passport, just asking if I had one or not.

After all the Beijing contingent had lined up, maybe up to 200 people in total, some more came later but I think we were shy of the 400 maximum this time) we all followed some cops under an underpass and to the stadium. Where we lined up, shoed the ticket QR codes, passed through security, didn’t have a temperature test or anything else, and into the stadium. 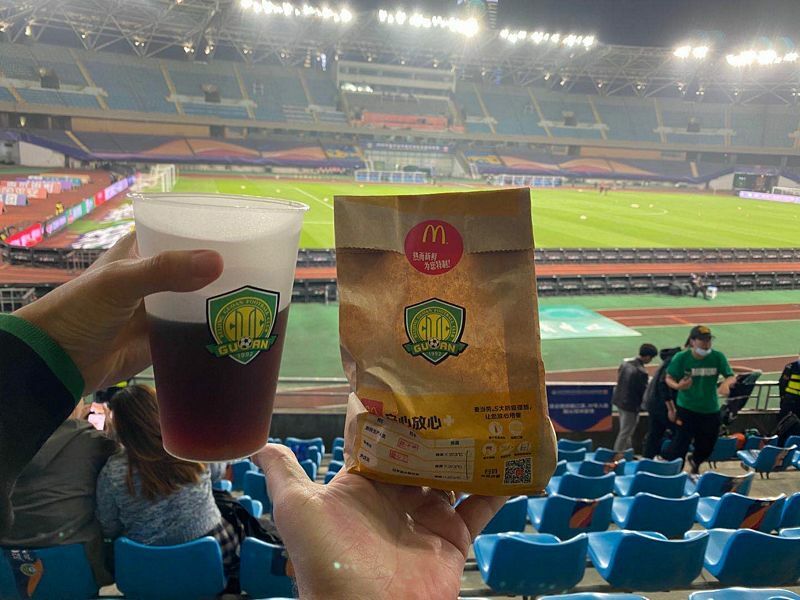 The club, Beijing Guo’an was good enough to lay on some refreshments for the supporters, some hot water and herbal tea, plus a McDonalds for each of us too (McChicken sandwich and a McPineapple McPie, or whatever it’s called,  in case any is wondering exactly what was in the bag). Seating was supposed to be socially distanced but in reality everyone just sat where they wanted. Masks were supposed to be worn but that was done by a minority. This may all seem very reckless to those readers in the depths of lockdown right now, but in China the situation is a bit different now and rates are very low, so this isn’t as daring or foolish as it may be elsewhere.

The game itself? Not a stone-cold classic by any means. SIPG is a better team than Guo’an but they were missing one of their best players and had a replacement keeper as well. We pushed hard in the first half and got a goal from Cedric Bakambu, a villain last year for missing a staggering amount of chances, this year the league’s top scorer, completely redeemed! SIPG attacked with some gusto though, we had some luck, our keeper Hou Sen made a number of great saves, and at half time it was 1-0. The second half we started well and soon made it 2-0 with a poachers goal from Chi Zhongguo. The game became a bit dull then and we waited for it to finish with us taking a 2-0 lead to the second leg. On 90 minutes though we managed to let them in at the other end and finally SIPG scored. The game finished 2-1. A victory for the good guys, but a pity to not be able to keep that two-goal lead.

Anyway this may not seem all that exciting, but the chance to watch football in an actual stadium for the first time this year was once well with taking. The Suzhou Sports Centre Stadium has a capacity of 45,000 spectators. Officially this game, including all fans, plus the team’s guests and hangers-on was just 1000 people. The smallest crowd I have ever been in for a game in China, and a really amazing experience indeed. Even though there were times when the stadium was so quiet that we could hear the players talking to each other on the pitch!

Visiting Beijing for a trip with Koryo Tours? You too could come with us to watch our Beijing Guo’an Football Club if you time it right. Let us know when you’re coming and we can help you get tickets, learnt he necessary bad language to qualify as a local football fan, and have a wonderful soccer experience! 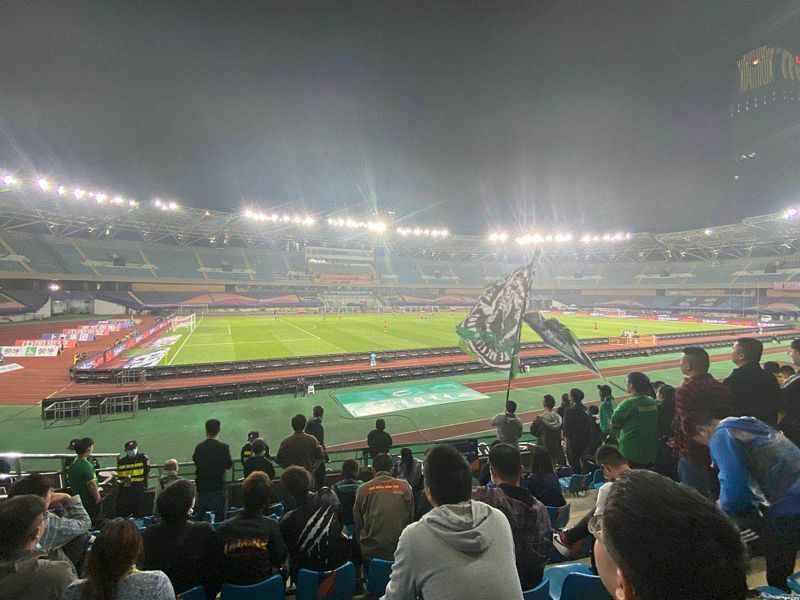