Whilst nearly everyone travelling between Pyongyang and Nampo takes the Youth Hero Highway (also known as the Pyongyang-Nampo motorway), there is another road- one far less travelled but with a smattering of interesting sights along the way.

The Old Taedong Road follows the river southwest, before bearing inland into South Pyongan province and on towards Nampo.

The road snakes through local towns and is a chance to travel through a rarely seen industrial part of North Korea.

Far less wide than the Youth Hero Highway- but then, so is every road in North Korea (and most roads in the world)- this is a road, not a motorway.

The surface is in a fairly poor state of repair, largely due to years of trucks rolling along with it to the factories that line the river.  It’s a bumpy ride over potholes again, but as it is a local road, your driver is likely to take it a bit more easily.

The first half of the road follows the Taedong, with factories and towns along the way, and open farming to your right.

You are unlikely to stop at too many places, but the rusting machinery, derelict factories and the busy shipping lanes make some good photo opportunities.

Unlike the Youth Hero Highway, the Old Taedong Road starts near Mangyongdae, the birthplace of the nation’s founder and eternal President, Kim Il Sung.

Pyongyang ends abruptly as you pass by Mangyongdae forest and cross the Sunhwa river as it flows into the mighty Taedong, with the city buildings giving way to open farmland.

The area to the south-west of Pyongyang is flat and fertile land which is farmed all the way to the sea.

10km from Pyongyang, you come to Kangson and its enormous steel production plant.

In the bad old days of Japanese occupation it was known as the Kangson Steel Works, but after the DPRK was founded was then nationalised, expanded and renamed Chollima in reference to the mythical Pegasus-like horse of the same name which epitomised the spirit driving the young nation forwards.

Visits to the plant can sometimes be arranged.

27km from Pyongyang, and just after you cross over into South Pyongan province, you come to the small town of Taean.

Taean is famous for two things- the Taean system of management which involves party committees in providing oversight for how factories operate, and the glassworks itself.

Officially known as the Taean Friendship Glass Factory, the ‘friendship’ part of the name refers to the Chinese investment that got the factory off the ground.

Inside it is a fairly impressive affair, and a light-touch approach to health and safety means you can get up close to the smelting furnace and the sheets of glass being aggressively cut into panes. 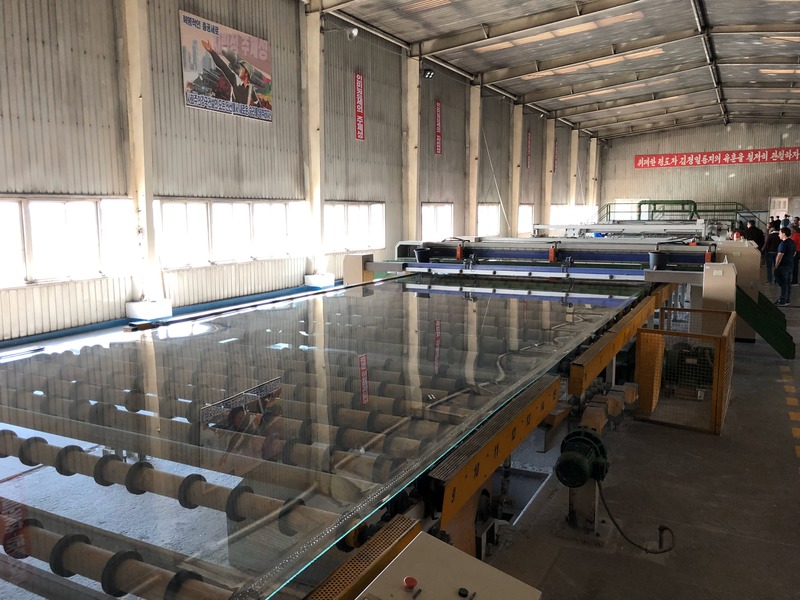 The road also continues straight ahead for a more direct route to the West Sea Barrage, avoiding Nampo city centre.