Sweetmeat is a euphemism.

This is dog meat, a fact which is not meant to be obscured, although there are not photos of dogs on the menu or on pictures around the restaurant (and people do keep pet dogs in Pyongyang, a very middle-class thing to do of course as dogs are not cheap to feed and take care of, but not all dogs are food and not everyone eats sweetmeat anyway).

Dog meat is still eaten in both North and South Korea as a traditional delicacy. 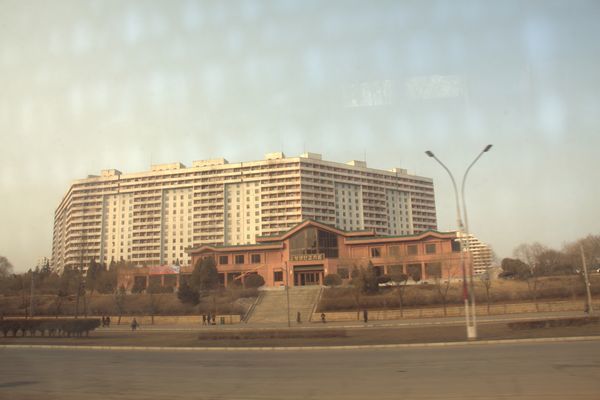 Pyongyang Sweetmeat is located on Tongil Street in Pyongyang.

Tongil Street is one of the two famous massive boulevards in Pyongyang, this one opened in 1987 and is home to tens of thousands of families, as well as to some famous sites in Pyongyang such as the Tongil Market (the first of its kind in the capital), the Statue of Ri In Mo, Pyongyang Number 1 Duck Barbeque Restaurant, and the main Pyongyang Sweetmeat Restaurant.

Sweetmeat is available year-round but is traditionally eaten during the lunar calendar period known as sambok, the three hottest days.

This is usually in late July.

This restaurant serves a wide range of sweetmeat dishes, anything you can imagine really.

It is served hot as it is believed that at the height of summer heat combats heat and works to cool the body down (see the tendency for many people in Russia to eat ice cream in the depth of winter as another version of this claim perhaps?), and for those who are really feeling the heat it is the very spicy dog soup which is recommended by staff.

In North Korea, it is believed that if you drink beer while eating sweetmeat it will harden in your stomach.

This is to be avoided so you should go with soju instead, or just water as it is going to be a hot meal on a hot day if you’re doing this the traditional way.

Sweetmeat is not cheap, and it is not common either.

Anyone eating in Pyongyang and wondering what the meat they are being served is can be assured that it is not dog.

If you are on a visit and you want to try dog then this needs to be specially requested and paid for separately.

The reputation of Koreans for eating dog is legitimate but it is not nearly as common or as universal as many people assume.