Dalanzadgad is a small city the capital of Mongolia’s Omnogov province 322 miles from the capital Ulaanbaatar.

A none-stop drive will take around 7 hrs. 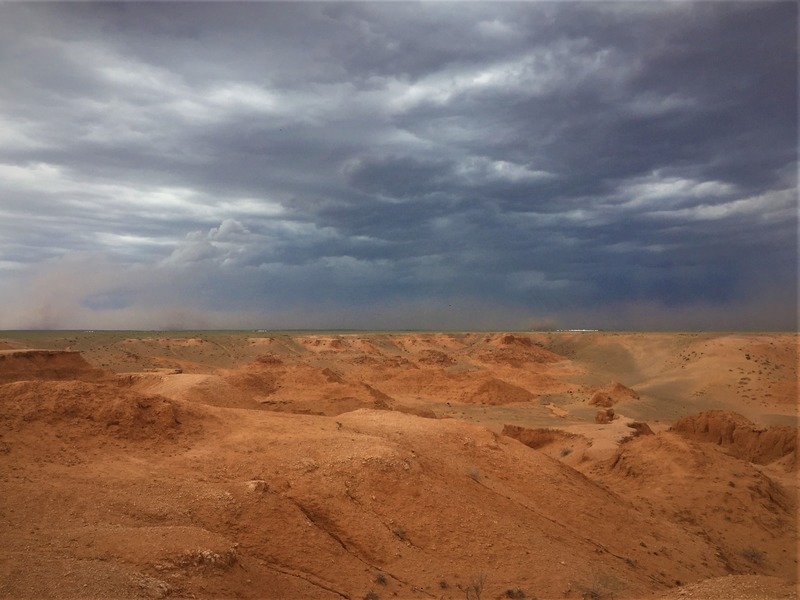 The population of this settlement is around 70,000, although it never feels like it since Dalanzadgad is a civilization in the desert.

It has the feel of a frontier town located with one foot in a movie set and the other in the past. Many tourists pass through without realizing where they are. Tourists make a quick stop, pick up supplies form the supermarket before heading out into the Gobi desert.

There is not too much to see in Dalanzadgad, an old museum feeling like a throwback from the Soviet Union if you have an interest in badly stuffed animals, dusty exhibits, then this may be for you.

15 Facts on the gobi desert

This small airport is located around 5KM from the city and is an essential hub for the Gobi desert.

During the summer, there are at least two flights daily run by Hunnu air and Aero Mongolia.

Busses to Ulaanbaatar depart twice daily from the small bus stand in the centre of town. The journey will take around 12 hours.

During the winter months, the scheduling will become less frequent, and windows may be sealed with a white cloth to protect from the extreme cold.

There are hotels in the town, although most visitors here will head straight to the national park and stay in one of the many Ger camps.

For many, this is one of the major destinations when visiting Mongolia due to the airport in Dalanzadgad; journey times can be cut, avoiding longer drives.

The area was officially designated a national park in 1965 to preserve the beautiful nature of Yol valley and the surrounding mountains. Over time the park has been extended to incorporate other areas and territories. Most notably, in 1993, the regions of Khongor Sand Dunes, and the paleontological sites at Khermen Tsav, and Zulganai river. Gobi Gurvan Saikhan is now 27,000 square kilometres and the largest national park in Mongolia.

Yol Valley is situated within the Gurvan Saikhan Mountains. This narrow gorge has long been an attraction for visitors to the region.  At the opening of the valley sits a small museum which has amongst it exhibits fossilized dinosaur eggs and bones. Once inside, the gorge begins to narrow, never failing to impress with its high rocky sides and narrowing valley floor.

Yol Valley has also been famous in the past for the presence of its year-round ice field.

Unfortunately, due to the change in climate, the Yol Valley ice tends to disappear in early June. Another draw for visitors is the wildlife in the area; we would recommend an early morning visit to catch any possible rarities.

These amazing dunes stretch for over 150KM and rise over 300m; they are the largest dunes in the country and worthy of a visit.

The name singing dunes refers to the sound made as the wind catches the surface, causing the occasional humming noise.

Our recommendation is to overnight in one of the nearby ger camps visiting the dunes via camel. As it can take around two hours to climb the Khongoryn Els Sand Dunes early morning or evening are best to avoid the heat.

The name Bayanzag means rich in saxaul bushes, and it is as you look out these spindly bush-like trees are now all that grows. In prehistoric times this whole area was covered by dense forests and visited by dinosaurs.

Bayanzag was made famous when visited by the explorer Roy Chapman Andrews who also gave named the area flaming cliffs.

The reason for Roy Chapman Andrew’s visit was to unearth Bayanzags, early prehistoric visitors, and he did.

Andrew’s discoveries included the world’s first fossilized dinosaur eggs, petrified forests, and early mammals. Visitors these days find very few fossils but do find the flaming cliffs to be stunningly beautiful. Bayanzag lays the desert out beneath your feet great for photography, for the best change in colour visit at sunrise or sunset.

When visiting these areas, you will need a private or shared car.

There is no public transport to the various destinations listed.