Chongsokjong is a fascinating area very commonly depicted in North Korean paintings and videos of iconic places of natural beauty around the country. Chongsokjong, 총석정, means roughly ‘concentration of rocks’. 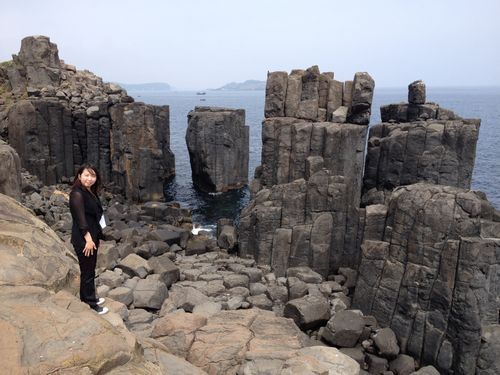 On the east coast of the DPRK, just a short drive north of Mt. Kumgang. 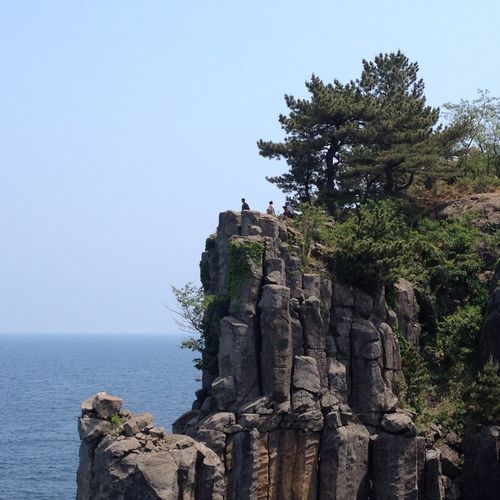 Chongsokjong is one of those places in the DPRK constantly threatening to become open to tourists but which, at the time of writing, remains frustrating still closed and access is not permitted. There has been but one single tourist visit to the area so information about it known, something to keep in mind for future trips!

Chongsokjong itself is characterized by the stunning basalt columns that rise out of the sea like stone sentinels, these are often shown on TV in the DPRK with waves smashing against them in a visual metaphor of the resilience of the country against relentless outside pressure perhaps, or maybe just to show a lovely and unique scenic place.

Chongsokjong has also appeared in pop videos, such as this one.

The topography and shape of the basalt columns make this a little bit like a Korean version of the Giant’s Causeway and this is also a place for local families to come for walks and picnics, as well as for fishermen to gather, and researchers to examine the flora and rocks of the area.

Many of the columns have some ancient graffiti on them to, in Korean and Chinese characters both, the Chinese script because this was the written language of Korea before the development of the Korean written system. Just like with the carvings done by early visitors at Persepolis and other significant sites around the world this is a case of just having to wait long enough until vandalism becomes valid historical documentation!

There is also an ancient Korean myth of a general who wanted to access a cave, but was held back by the force of the waves, so he somehow formed these rocks into a barrier bridge and was then able to go to the cave.

There is always a local myth when visiting Korea!

With luck visitors will be able to access Chongsokjong in the near future; for sightseeing, for leisure, for enjoying a bit of fishing, swimming, and seafood barbeque. It is a pleasant place with a unique style that should be experienced directly by more locals as well as foreign tourists, and has great potential for attracting sightseers.

A video has even been produced to promote the area, sadly a little prematurely!

For those of an artistic bent a beautiful 1930s woodblock print of Chongsokjong (from the Art Institute of Chicago collection) can be seen here. 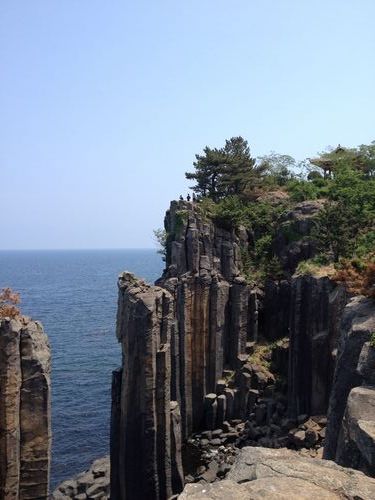