Bhutan Map: Where is Bhutan?

Bhutan is a small landlocked country. Covering around 38,394 square kilometres / 14,824 square miles, it is smaller than Switzerland, and surrounded by some big powers.

But could you point this off-the-beaten-path country out on a map?

Just where exactly is Bhutan…?

With little tourism in Bhutan due to the unique tourism policy to protect the beautiful landscape and the fact that it is the second least populated country in the world - few know where Bhutan is, and even fewer could describe a Bhutan map. 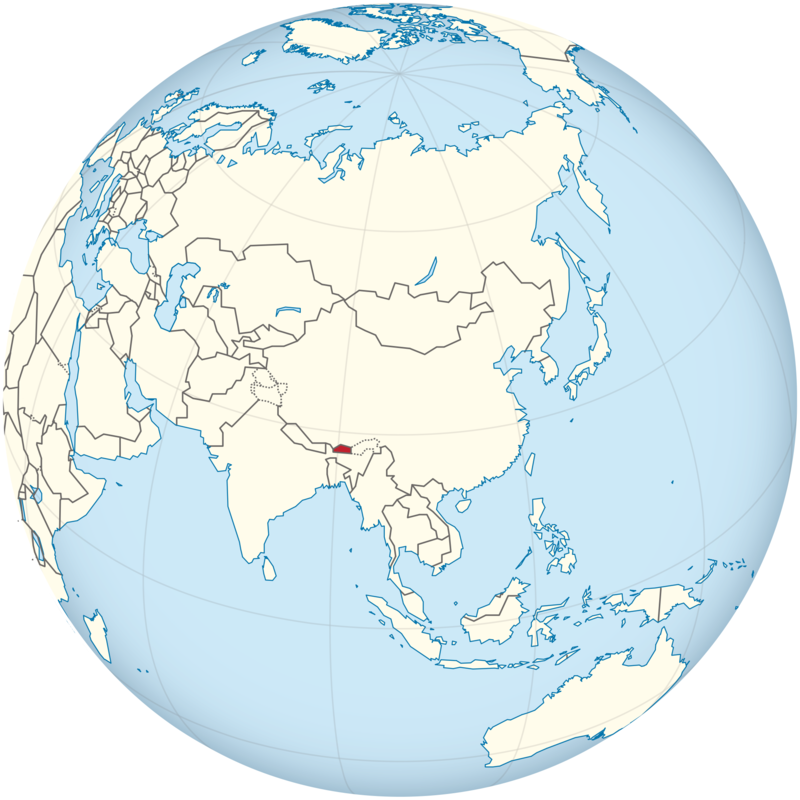 Bhutan is a landlocked country in South Asia. 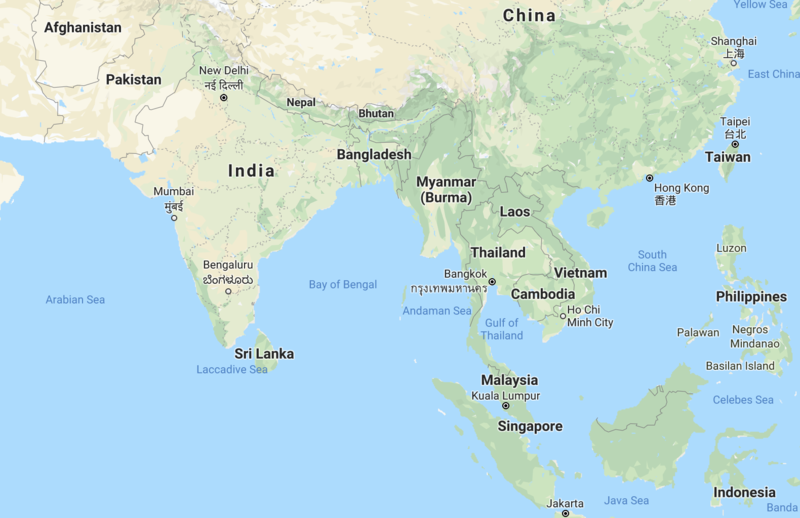 Where is Bhutan in Asia?

Bhutan lies between China and India, and borders Tibet in the North.

The Tibet border runs across the Himalayas. 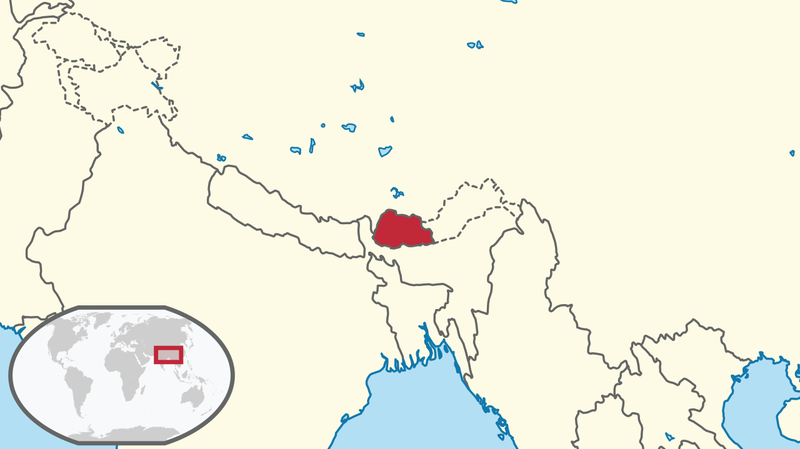 Where is Bhutan in terms of its surrounding countries?

India surrounds Bhutan on the other three sides; South, East, and West.

Other close countries to Bhutan include Bangladesh and Myanmar.

The somewhat oddly shaped uneven Northern border is due to the Himalayas running through it. 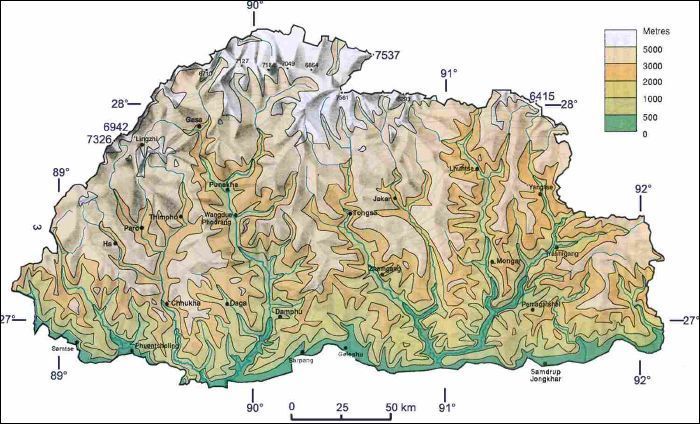 Bhutan lies on the Himalayan border and is home to several mountains over 7,000 M high.

The highest mountain is Mount Gangkhar Puensum. This lies at 7,570 meters and remains the world’s highest unclimbed mountain.

In Bhutan, climbing over 6,000 M is prohibited since 1994. Mountaineering is currently banned.

Bhutan is a high-altitude country comprising of the Lofty Mountains:

The lowest level is 97 meters above sea level. 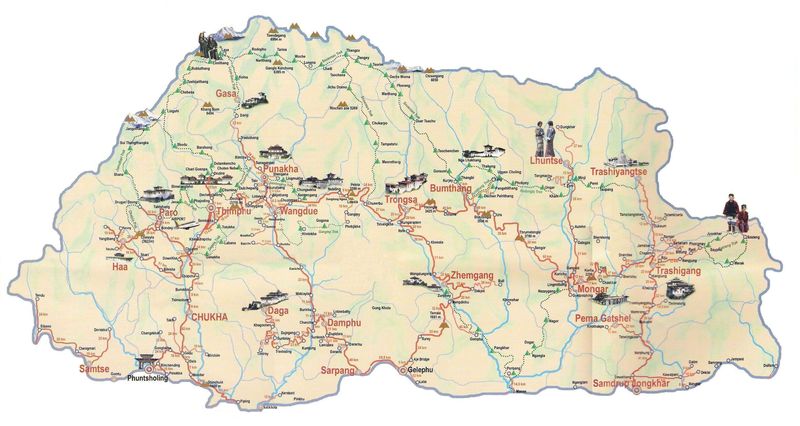 When it comes to where is Bhutan's best tourist spot - it's difficult to pinpoint just one.

With its beautiful scenery and untouched landscapes, Bhutan has a lot to offer in terms of tourism.

How much you get to see and where you go depends highly on how long you have to spend there.

Most tourist routes will cover at least Paro and Thimphu. Bhutan has the world's second-lowest population per square meter. In 2016, this was 800,000 people. This is the last time a census was conducted.

The government put high importance on protecting the country's natural beauty and landscape. They have the policy to keep 60-75% of Bhutan's natural forest and nature.

Because of this, Bhutan may be one of the most incredible places in the world for hiking.

What more could you ask for? 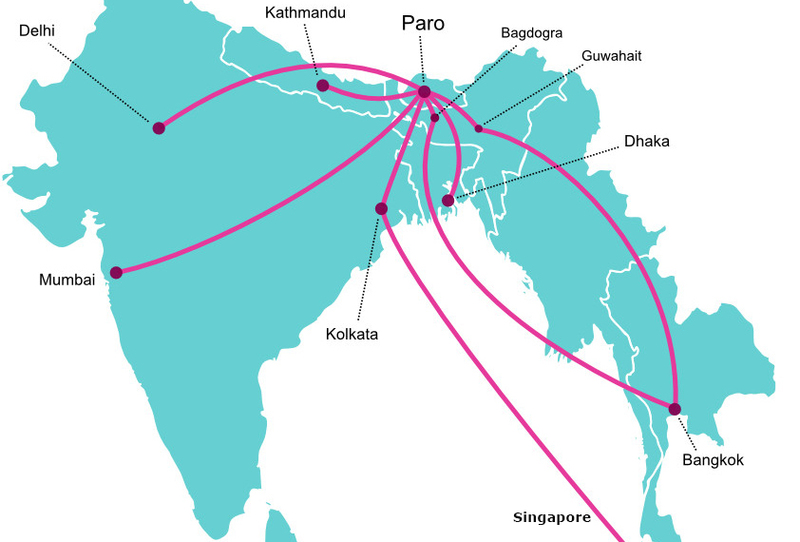 All flights are operated by Bhutan's airline Druk Air.

Nepal shares no border with Bhutan, however, it is a popular gateway to Bhutan due to the regular direct flights between Nepal and Bhutan.

Other flight routes include various flights from India throughout the week, flights from Bangkok in Thailand and Singapore.

There is also a flight twice a week from Dhaka, Bangladesh.

Apart from flying, there are also land borders you can enter from India.

Read more on how to get to Bhutan.

The major cities in Bhutan are Part and Thimphu.

In both of these places, you can visit monasteries, museums, fortresses, or join in the festivals.

Where is Bhutan's capital city?

Thimphu is the capital of Bhutan. It lies in the west of Central Bhutan. It’s the largest city in Bhutan.

Paro was the capital of Bhutan until 1955. This was made official by the King of Bhutan in 1961. 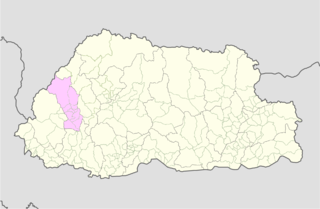 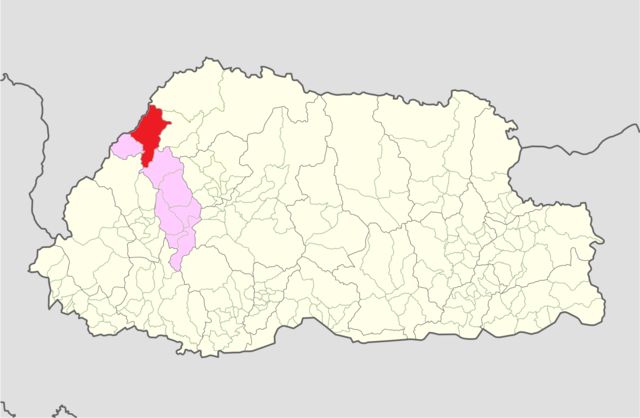 Each district, or “Dzongkhag”, in Bhutan has its own administration and judiciary.

All districts in Bhutan answer to the central administration. This is in Thimphu.

In total, there are 20 different districts.

These are then divided into smaller counties. There are 205 counties throughout Bhutan. 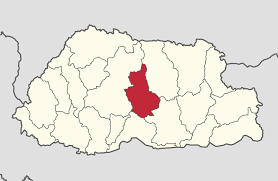 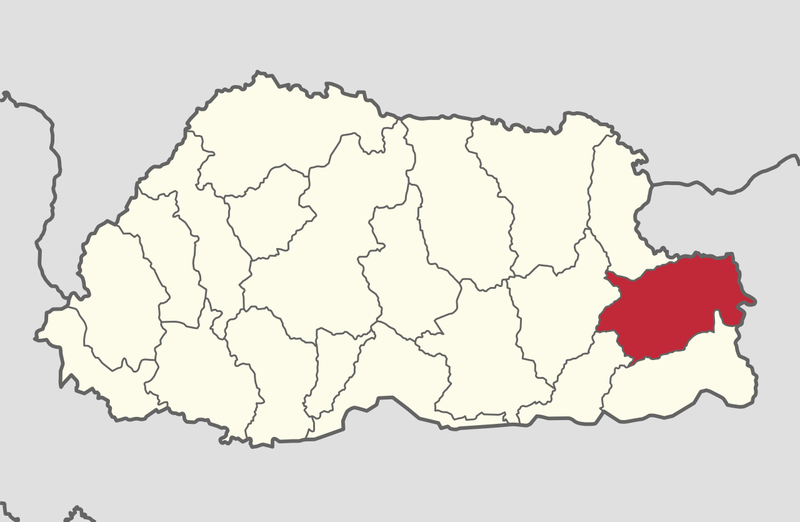 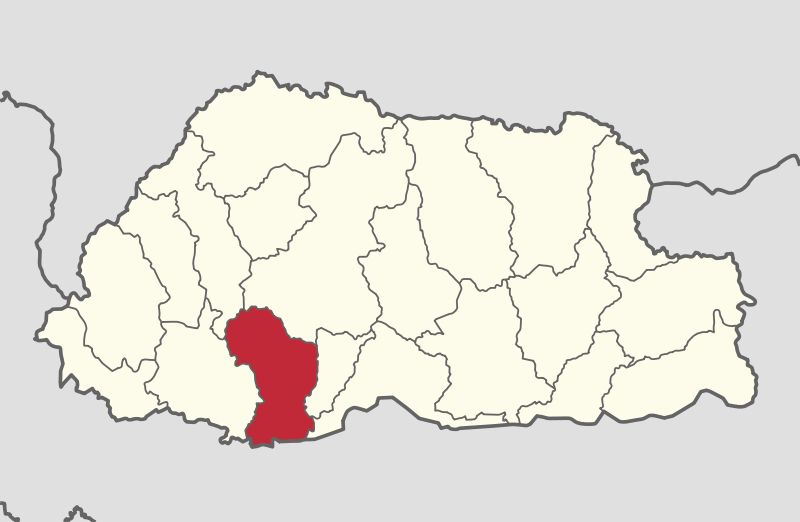 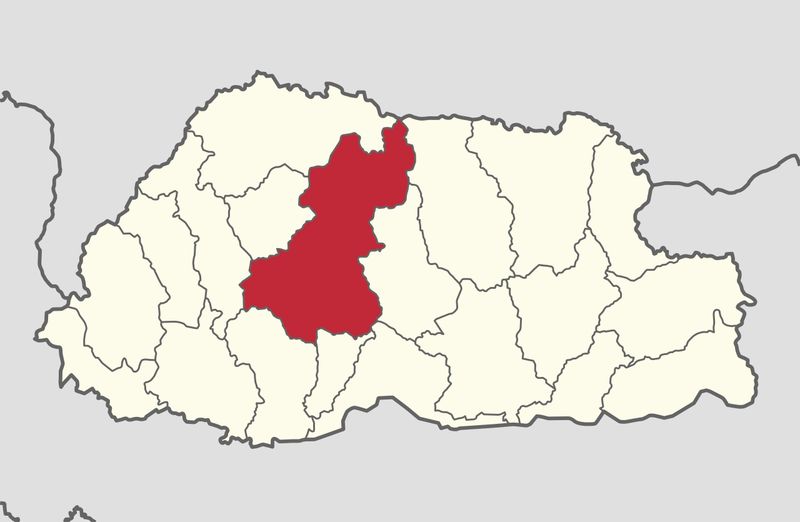 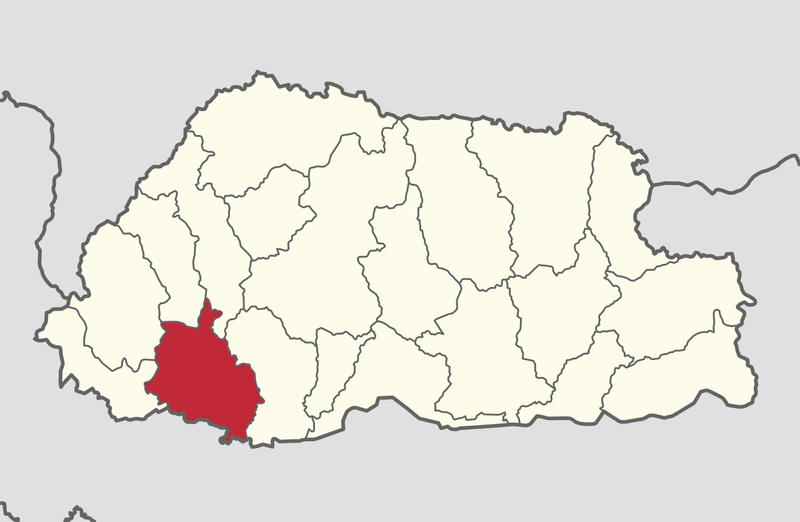 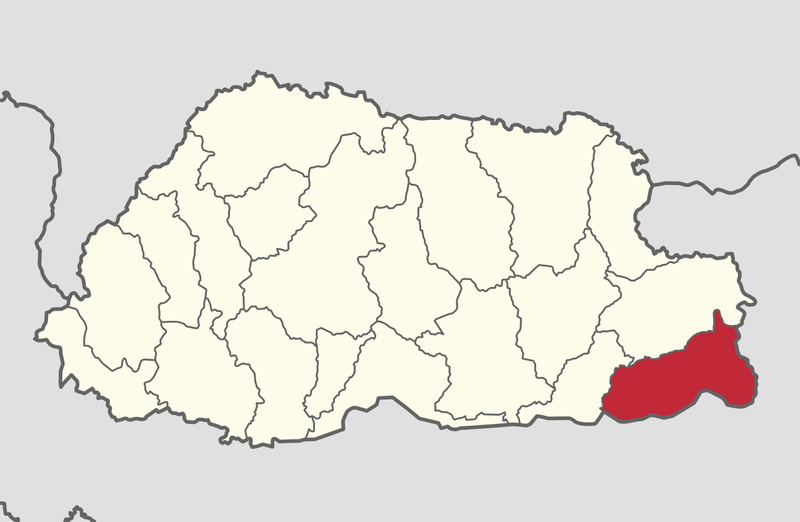 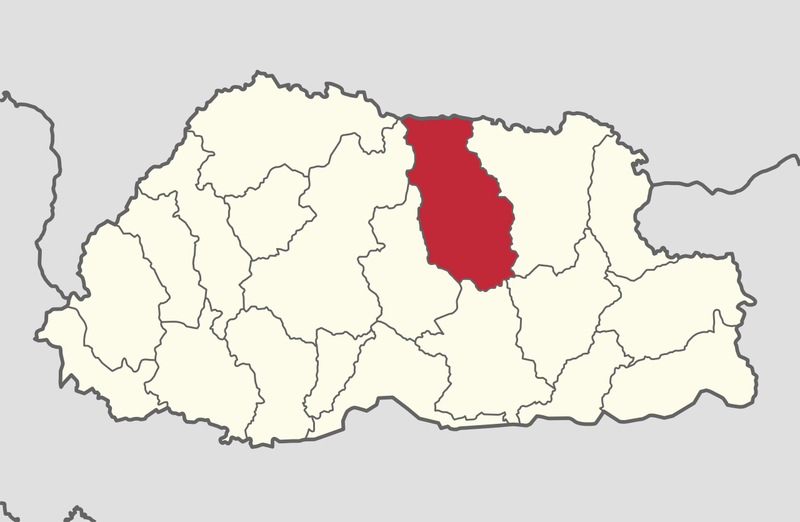 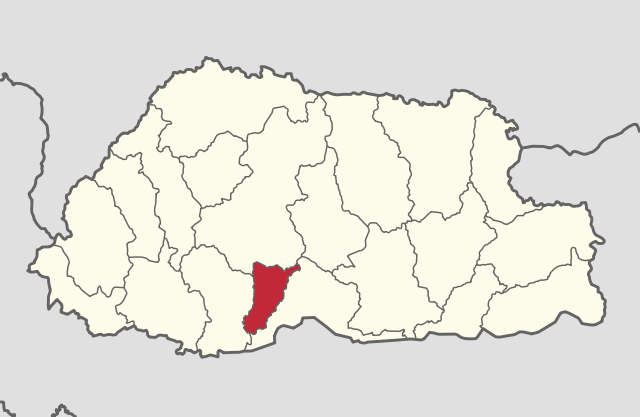 Now you know where is Bhutan and have extensive knowledge on the Bhutan map, and various other Bhutan maps - find out more about this mysterious kingdom, or visit yourself!