Introduction
History
What to do in Merv
How to get there

Writing about Merv is a daunting prospect indeed, simply put it is one of the greatest cities in the history of the world.

Yet, it lies in ruins, with camels, sheep, and the occasional human roaming the vast area in which once-stood a mighty multicultural metropolis.

It is both awe-inspiring and deeply sad, an evocative place of intensely vibrant history but which needs concentration, appreciation, and focus on the details to bring to life today. 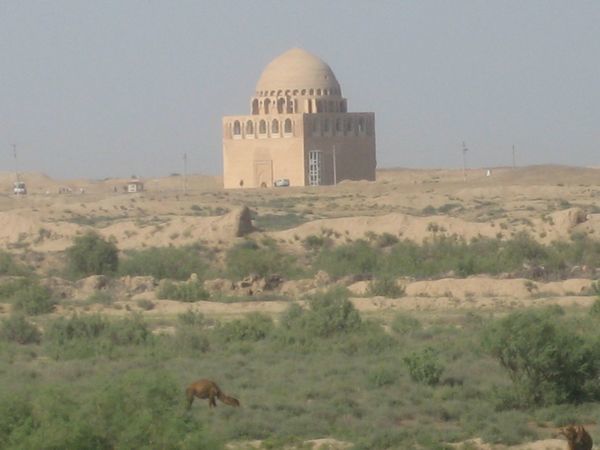 In the mid-12th Century, the golden age of the Silk Road, Merv was possibly the largest city in the world, with a reported population of more than one million people

(bear in mind that population numbers from the distant past are subject to considerable exaggeration and guestimation!).

Merv had grown in stages from a simple oasis in the 3rd Century BC to one of many Alexandrias created by Alexander the Great as his Hellenic forces swept through the area after their epoch-defining defeat of the previously dominant Persians.

City after city was built on the site and merged together into a vast conurbation.

As trade and communications developed over the centuries, the variety of peoples visiting, passing through, and settling in Merv expanded and the city became possibly the first truly cosmopolitan places in the world.

With a complex series of canals irrigating the whole area it was a literal oasis as well as an intellectual, spiritual, and philosophical one.

Houses of worship and learning sat side by side, 8km of walls encircled the central citadel, remnants of which still exist, workshops producing goods in fine metals as well as industrial goods proliferated, and even ice could be found commercially produced int his desert (ruins of ice houses exists here still).

Backgammon was invented in Merv, some claim even Chess has its origins here rather than in India too.

While the population by the peak of the city was predominantly Muslim there were also Christians (Nestorian heretics and those of the more established variety both), Buddhists, Chinese, and even a population claimed to be descended from the defeated Roman Legion of Marcus Crassus, memorably executed in brutal and poetic manner by the Parthians centuries earlier.

All things must pass though, and the passing of peak Merv came at the hands of Genghis Khan; a siege in 1221 ended in utter destruction of the city and its population, with a mere handful of survivors being made up of the most skilled artisans, taken away to pass on their skills to their new masters.

The Golden age was over, Merv would dwindle over the next centuries even though the remnants of the buildings provided shelter to thousands of people at any one time.

The death blow came with the deportation of the entire population of 1785 to the Bukhara Region, in today’s Uzbekistan.

Merv’s once-magnificent buildings again began to crumble into the sands. It is hard not to stand in the ruins of Merv and be moved to come up with a knock-off version of Bryon’s poem Ozymandias, the depth of history erased here so long ago hangs heavy over the remnant, and who knows how many more years of utter abandonment it would have taken for Merv to vanish from the human memory as well as the physical earth. 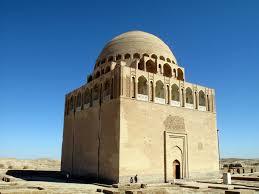 What to do in Merv

The site is vast, a vehicle is needed to get around and a trip taking up a whole day is very much recommended due to the wealth of ruins in existence and the distance between them.

There are all manner of mausolea, old wall remnants, and other archaeological features to visit on a trip here.

This format is too short to list them all but we will add some highlights and you can see in much greater detail on the spot;

Erk-Kala – the fortress of one of the first of the cities that would merge in all three dimensions to become Merv; the city of Alexandria.

Walls that towered up to 30m high were built and still exist (although mostly as mounds than true walls now) in the 3rd Century BC. Digs still continue here as this area has the longest history and some of the most diligent teams of archaeologists working on it.

No buildings remain extent inside the walls, unfortunately, so it is a matter of extrapolation and imagination as to how much of a sense of life millennia ago you can get here. 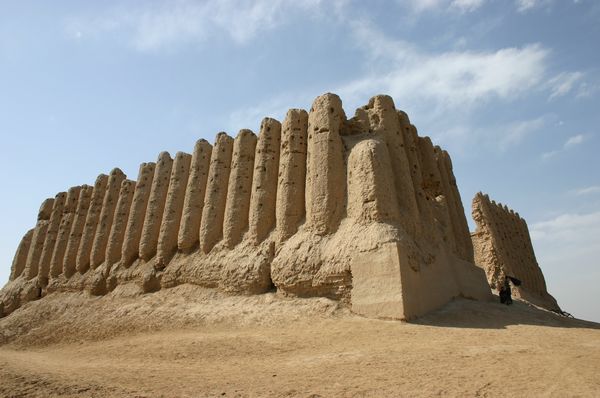 Gyaur Kala – the successor city to Erk-Kala, a much larger complex that engulfed the former Alexandrian fortress and spread itself out under the rule of first the Hellenistic successor Empires and then Islamic rule following the Arab conquest.

Also a walled city, with barriers mightier than any other city of the world at the time, being that they were made of mud bricks makes them fragile this far removed from their baking so car should be taken when climbing up the embankments that have grown up over these walls.

Sultan Kala – the peak city of Merv existed withing this city that in turn engulfed Gyaur-Kala.

Again we have walls, but this time also a moat and a more complex irrigation system (water being life in this region more so than most other major cities of the time).

Many of the ceramic pipes have been excavated but hundreds of kms of them remain undiscovered and beneath your feet.

This was a proper city that we would recognise now; with slums, administrative centres, caravanserais (early hotels), all of them reduced to lumps in the landscape now.

But with a good guide and a sensitivity to the ravages of time you can still have your awe-inspired in this place!

Mausoleum of Sultan Sanjar – finally, a real building with a roof and everything!

This is (on the upper stages at least) reconstructed to repair the damage done by the unsympathetic Mongols.

This mausoleum is on of the most architecturally significant buildings of its era, with a commanding height of 38m with shining turquoise tiles on a square double dome

(specifically designed to be seen from a day’s march away, to welcome home returning armies and the double dome technique being visible here in a complete form unlike the damaged version you can see in Konye-Urgench)

being its defining characteristic.

Inside it is cool and fresh regardless of the raging inferno of summer outside, and pilgrims still make journeys to visit this holy place, despite the lac of the remains of Sanjar himself, removed by the Mongols.

A note on Sultan Sanjar the man, he is one of history’s proper badasses actually;

Sultan of the mighty Seljuk Turks, the preeminent power in the region for centuries.

He warred against his brothers to claim the throne, crushed rebellions on all sides, invaded and ravaged his neighbours, repelled invaders, and even went to battle with the famed Assassins

(although when they left him a dagger on his pillow he thought better of this!).

Anyway history is long and complex but in general he was a tough guy and fought many other tough guys, winning and losing at times.

His final passing in 1157 marked the end of the Seljuk Empire as a viable civil and military force and it was only a few decades until the Mongols took control of the whole area.

Not only a man of war but also a patron of the arts, Sanjar is venerated mostly for his support of Persian poetry more than anything else these days.

The lesson here perhaps being that if you temper your violent deeds with some literary tendencies then history may forgive you in the long run – this is not advice to any of our readers though, just idle speculation on the nature of historical memory!

Kyz Kala – probably the most recognizable building in what remains of ancient Merv is this highly impressive mudbrick structure with corrugated walls.

(with some great stories being told about it being a house of maidens whose walls were so tall to ensure that only the strongest of suitors could throw messages over them to their paramours inside).

UNESCO (which inscribed the whole of the ancient Merv site in 1991) considers Kyz-Kala to be the best preserved example of a köshk in existence.

It will be the site of most of your photos when you visit Merv too, a very beautiful structure even though half-destroyed, a place you can start to truly imagine and appreciate the prosperity of Merv at its peak. 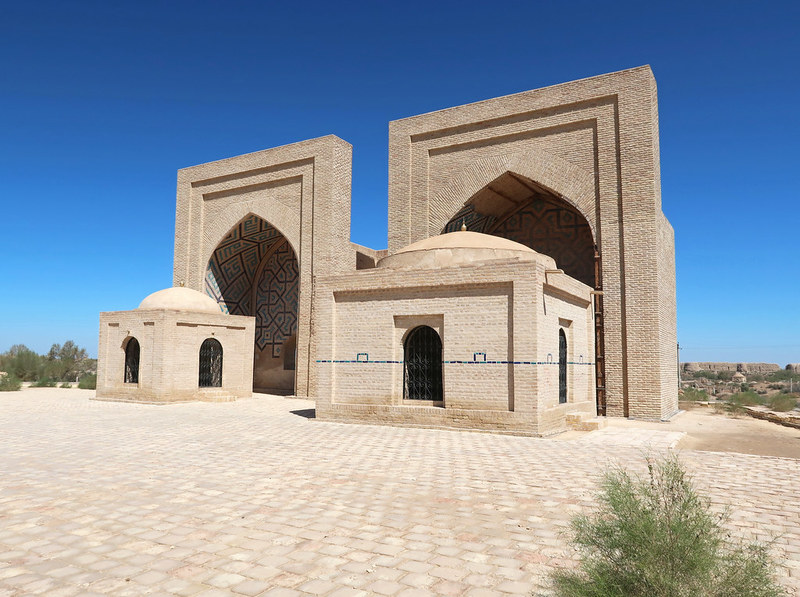 Merv is right in the middle of the country, and in the desert, so your choices are by road or by air to the nearby city of Mary.

Did the Mongols leave any good hotels?

There are not overnight options in the actual site of Merv apart from sleeping rough, camping, which isn’t really allowed (it is a UNESCO site after all).

The nearest accommodation overnight is in the city of Mary, see our travel guide to that place for info on where to stay.

There are also no restaurants in Merv, and the advanced irrigation system was destroyed 800 years ago, so take enough to eat and drink when visiting and touring the site. 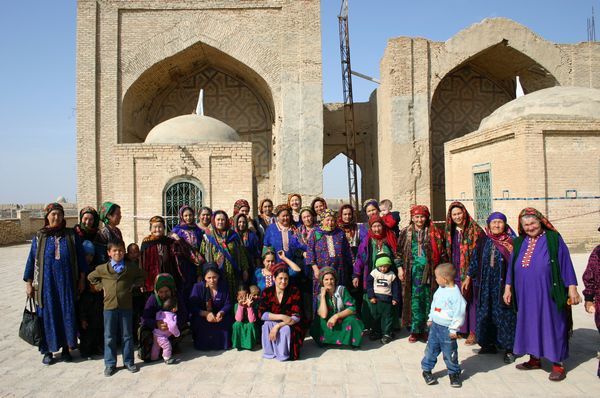