Looking for a marathon that gives you a different experience? How about the feeling like you're in the Olympics? We've identified the 5 best marathons that do this!

There are hundreds of marathons to enter around the world with just about every country having a marathon to enter. There are many great marathons to enter, but how many give you – the amateur runner – the same feeling as having just run in the Olympics with crowds of people cheering you on and a stadium finish?  Looking into it there aren’t that many that deliver that experience.

Only a few people get the chance to enter the Olympics, and even then they can only do so after investing themselves into it for many years just to be the best they can be for the opportunity. As an everyday person who runs just to keep fit, we can only ever dream about what it would be like to run in an Olympics competition.

But what if we could find a marathon event that delivers that to us in some way? Is there a marathon out there that we could enter that could make us feel like we’re running in the Olympics?

We’ve done the research and found five marathons that we believe do this, so without further delay we present to you in no particular order, a list of the best Olympic Finish Marathons from around the world!

Considered to be one of most liveable cities in the world, Melbourne’s premier marathon event happens in early October and is Australia’s largest marathon.

The event started in 1978 and now sees over 35,000 runners hit the streets of Melbourne city, offering distances of a full marathon, half marathon, 10km, 5km, and even a short 3km walking event.

All distances start just outside of the central business district and then take various routes around the city taking in the CBD, Botanical Gardens, Albert Park (Melbourne’s Formula One venue) and Port Philip Bay.

Come marathon day the stadium isn’t full, but there is a large crowd of people there to support friends and family who are participating in the marathon. It’s a massive stadium nonetheless and as an amateur runner the feeling is incredible to cross the finish line inside being cheered on by the crowd here! 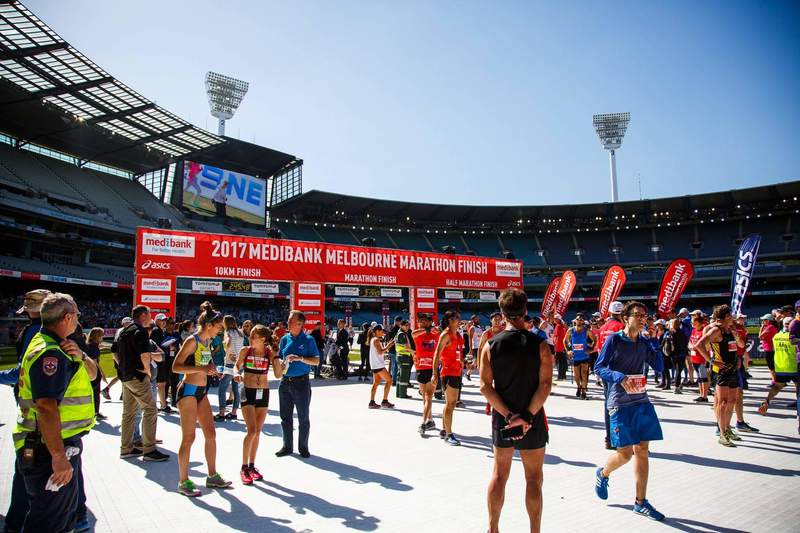 Established in 1979, the Stockholm Marathon happens annually either at the end of May or start of June. It reportedly has around 18,000 people enter the event and offers a 5km and full marathon distances only.

Stockholm’s Olympic Stadium was the home to the 1912 Olympic Games and currently accommodates around 14,000 people in its athletics configuration.

On marathon day the stadium contains an enthusiastic crowd cheering on marathon runners as they cross the finish line.

Due to the Olympic Stadium finish and great course, The Ultimate Guide to International Marathons (printed 1997) ranked the Stockholm Marathon as the best marathon in the world. 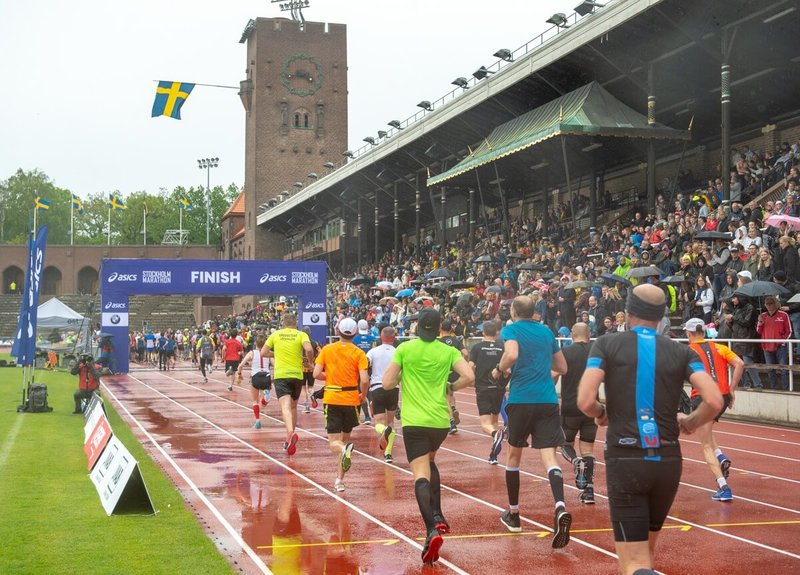 Starting in 1975, the Amsterdam Marathon happens on the third Sunday of October. The event offers 8km, half marathon and full marathon distances. The event can accommodate up to 45,000 participants in total across the distances.

The event was awarded platinum label by World Athletics in 2018 and is just one of a handful of marathons around the world outside of the World Majors that have earned this.

The full marathon course runs through Amsterdam taking in the beauty of the city including its canals, streets and parklands, but the big highlight is that it starts and finishes inside Amsterdam’s Olympic Stadium.

Amsterdam’s Olympic Stadium was home to the 1928 Olympic Games and currently can accommodate around 22,000 spectators.

Officially the sixth fastest marathon in the world, this combined with the great course and stadium finish makes this one of the most exciting marathons in the world. As their own marketing says – feel like an Olympic hero for a day! 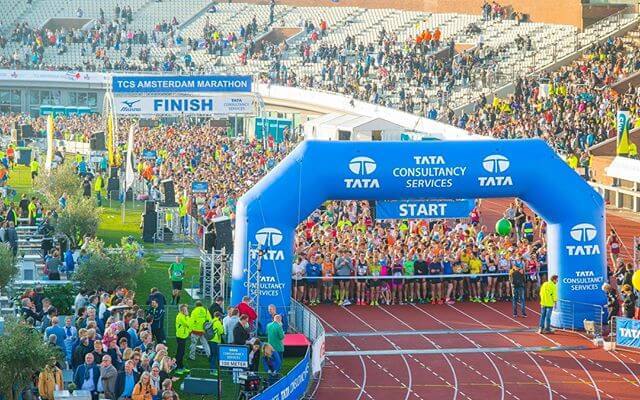 The Athens Original Marathon, also called the Athens Authentic Marathon, started in 1972 and honours the spirit of the legend of Pheidippides which was the inspiration for creating the first official marathon race in the first modern Olympics in 1896.

The event happens in early November and offers distances of a full marathon, 10km and 5km.

The course starts on the road outside of athletics track in the town of Marathon and then follows the road to Athens finishing inside of the Panathenaic Stadium in Central Athens which was home to the first modern Olympic Games and is the place where every Olympic flame is handed over to the host country.

Overall 60,000 participate in the event with 20,000 committing to the marathon distance.

Runners complete their run in the Panathenaic Stadium, which can reportedly accommodate up to 80,000 people, with a large crowd filling the stands and cheering runners across the line.

Not only does the Athens Marathon give you the Olympic experience, it’s also the most historically significant marathon where you are running a marathon in the birthplace of the marathon! 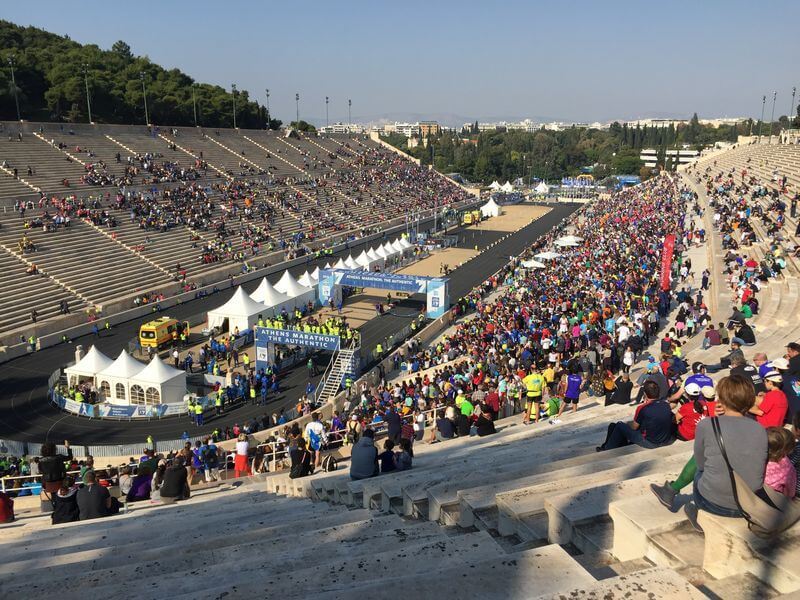 Yes we’re a North Korean travel company, but there is something about the Pyongyang Marathon in early April that really get’s our motor going!

Officially called the Mangyongdae Prize International Marathon, but better known as the Pyongyang Marathon, it started in 1981 and generally happens on the second Sunday of every April. It forms part of an annual sports competition in the lead up to the birthday of North Korea’s eternal president Kim Il Sung. It only opened to foreign amateur runners in 2014, but is the country’s premier annual sporting event. It is a small marathon compared to many other events with only around 2,000 participants in total.

It’s not just a simple marathon in North Korea, the organisers have created an event that really stands out amongst other marathons.

The event starts with the official opening ceremony inside Kim Il Sung Stadium in Pyongyang which includes a walking lap of the stadium as 50,000 North Koreans welcome you into the stadium.

The race starts inside the stadium with a staggered start for each distance and the crowd giving a mighty roar to motivate runners as they head out onto the streets.

The crowd doesn’t stop at the stadium though, Sunday is a day off and thousands of local Koreans head out to the street to cheer and motivate runners along the route with shouts of ‘kapsida!’ or ‘belli! belli!’ which translates to ‘let’s go!’ or ‘quickly! quickly!’

The marathon follows a return course through Pyongyang taking in sights such as the Arch of Triumph, Ryomyong Street, Changjon Street, Kim Il Sung Square (where North Korea’s parades and political rallies are held), and the Taedong River before turning and running back again on the other side of Pyongyang’s wide tree-lined streets.

The marathon finishes with a lap around Kim Il Sung Stadium as the crowd cheers you on before crossing the finish line.

It might not have the Olympic pedigree of the other events in this list, but the Pyongyang Marathon is definitely worthy of its place as it will give you that same feeling of being an Olympic hero. And who knows, with the significantly smaller field you might just find yourself on the podium to the roar of 50,000 people making it all the more realistic!

Koryo Tours is proudly the official event partner of the Pyongyang Marathon. 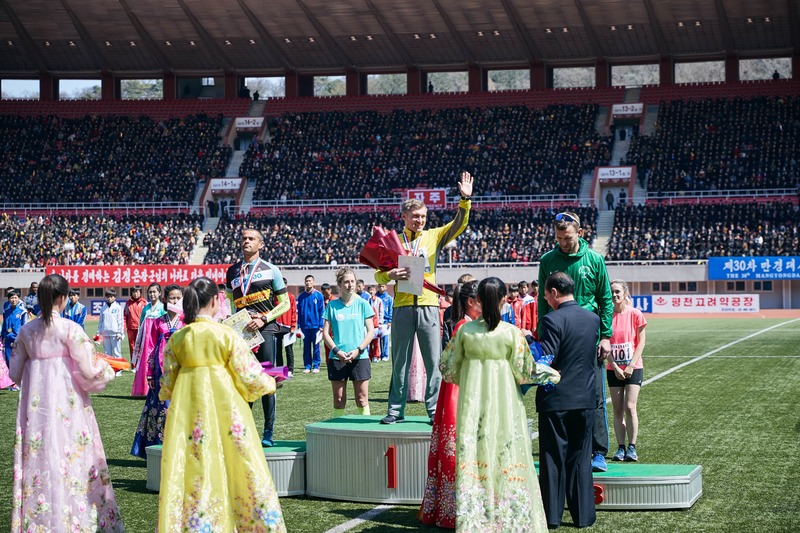