Yakutsk is by far the largest city in the Sakha Republic (commonly known by its previous/alternative moniker; Yakutia), a vast territory of more than 3 million square kilometres but a little fewer than a million people in total.

The Lena River, one of the largest in Russia and one which is both undammed and unbridged (also it may be where Lenin took his nom de guerre from) runs past Yakutsk and the river’s major port can be found here too.

A much older city than most in the eastern part of Russia, this regional capital is a dynamic and growing city, with a higher standard of living than most of the east, and a sense that things are really happening here the young population have reasons for optimism, even as they shiver it out in the winter! 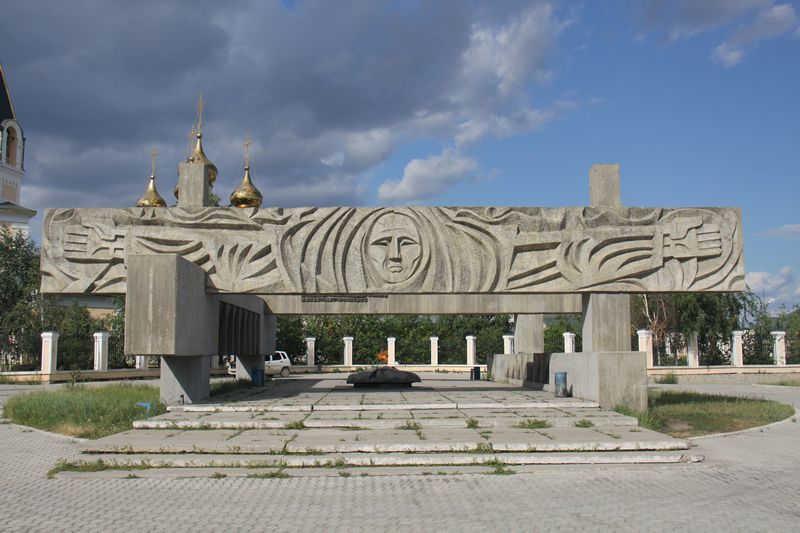 Yakutsk (and Yakutia) are named for the ethnic group the Yakuts. Originally from elsewhere in Siberia these people migrated to what is now the Yakutsk area in the 13th Century and merged with other local indigenous groups.

Russians came along as the Empire expanded to the east, bringing with them European modernity, technology, and Orthodox Christianity. Neither this nor Communism fully removed the paganism of the area, with many local practices still keeping pre-Russian traditions alive, most liberal people see no issue with these concurrent systems these days. 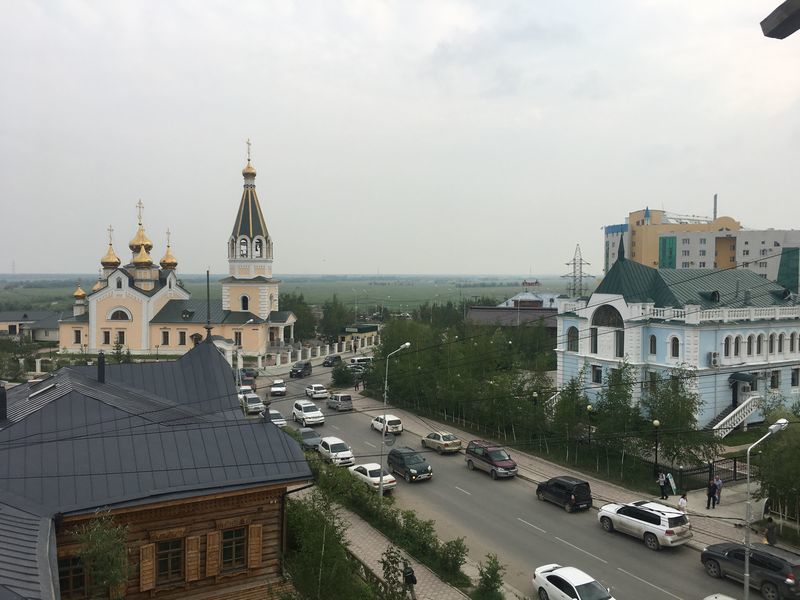 Today’s Yakutsk city centre is built in the familiar Soviet model; a massive central boulevard (Prospekt Lenina of course!) cuts through the city, with shopping centres, administrative buildings, hotels and much more all present.

The city has expanded with land being abundant so the population of just over 300,000 currently live in an area of 122 square km. The centre is built up, with apartment buildings in the outskirts giving way to dachas and larger houses in the suburbs.

Due to being built on permafrost, all structures are raised on piles, built on columns, so you can see beneath almost all of the buildings, and large pipes carrying gas around the city can be found everywhere,

One thing of note to visitors to Yakutsk in summer is the stunning amount of clouds in the sky; the views are incredible and unlike most tourists’ home countries. Genuinely something to behold and creating a sense of really being somewhere a bit different if you didn’t get this already from the journey needed to get here! 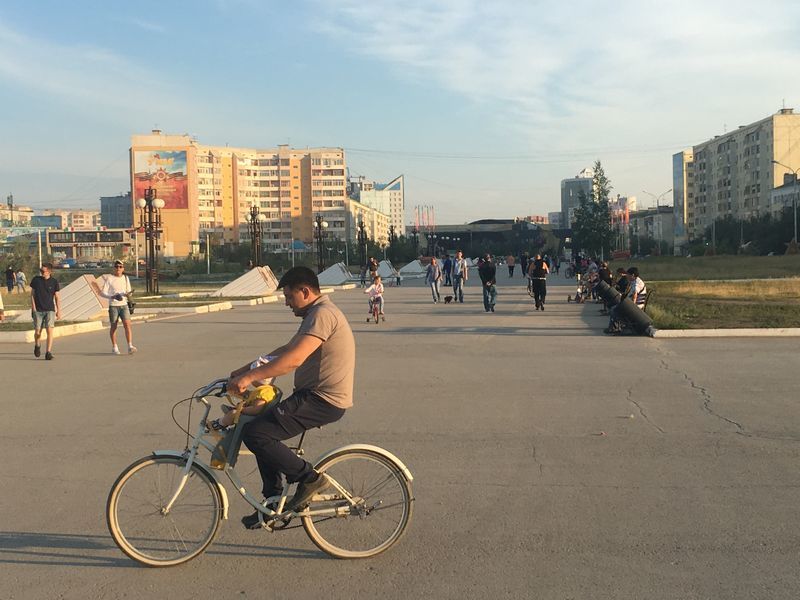 Yakutsk has the coldest temperatures of any major city in the world, so it is severely freezing in winter. Fog, which can sit on the city for weeks at a time, is also common at that time. So not only can you not feel anything, but you can’t see either!

Summer is much clearer, with stunning skies very common, most precipitation comes in summer as it is otherwise too cold for rain or snow most of the time.

Summer can be genuinely hot, much more so than many places much further south, so anyone living there is ready for anything! As a result of the summer temperature rising so high the greenery of the area is much more pronounced than many would expect, this is no wasteland at all, it is a verdant and lovely area when not covered in the white stuff! How to get to and travel around Yakutsk

Yakutsk Airport is an impressive modern building and is used year-round apart from in very heavy winter fog. Yakutia Avia, a major regional carrier in Russia, is based here. Almost all flights here are domestic (to a very wide range of Russian cities, this is a simple place to get to or away from) but also flights to Harbin (China), Seoul (South Korea), and parts of Thailand leave from here (Imagine leaving Yakutsk in deep winter and landing in Thailand - quite a change!) in practical terms flights are the way for most people to get here and away; the city is simply not connected to the rest of Russia by road (exception – see below)

The Kolyma Highway/Road of Bones runs between Magadan and Yakutsk, 2031km in total. It is a multi-day journey whatever kind of vehicle you have and whatever time of year you do it. If starting in Yakutsk the first barrier is the Lena River, there is no bridge (it is several km wide!). In deep winter it can be used as a road, when it thaws then a ferry service must be used to get any vehicle to the other side to start the Road of Bones properly

While somewhat awkward, it is indeed possible to get to Yakutsk by train, or nearly to Yakutsk! Until very recently it would be necessary to take the train to Tommot, and then get the last 450km by road (a long drive indeed!). Now it is possible to take a series of trains from the main Russian network (the point to get to would be Tyunda) to the city of Nizhny Bestyakh, this is however on the other side of the Lena so you would then need to take a boat (summer) or bus (winter) to get to Yakutsk after that journey

The Lena River is navigable and runs a very long way. Passenger services only exist within the Sakha Republic though and most ports other than Yakutsk itself are smaller and more obscure spots such as Lensk, Zhigansk, and Khadygu. So the boat option is of pretty limited viability really 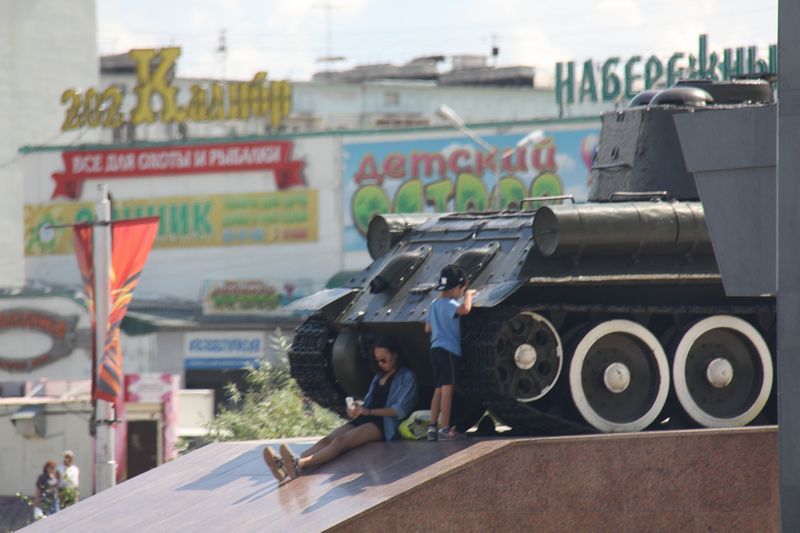 What to do in and around Yakutsk

Yakutsk, being a big city and regional capital, is very well served with cultural activities from high to low; from Opera, Drama, and Ballet theatres to comedy clubs and boozy bars, a circus, a zoo, and much more.

Yakutsk has also played host to various sports tournaments involving northern nations and people too, check when travelling here if anything special is going on!

Below are just a few examples of some things to see and do in Yakutsk itself. Local travel companies also arrange trips around the area to see the Lena River, Buluus Glacier, the stunning Lena Pillars, Reindeer Farmers, Rafting and outdoor activities, and much more. As Yakutsk is a vast territory some of these activities can take many days.

An excellent museum, part of a scientific research centre, dedicated to education about the prehistoric animals that once roamed this area, especially the mighty mammoth. With exhibits on other beasts such as the woolly rhinoceros, cave lion, and so on.

The star of the show is the mammoth though, these extinct pachyderms are still sought and found buried under the ice across the region, and various pelts, teeth, bones, and so on can be found here.

A great 3D video presentation is shown to visitors of ho the scientists here managed to find a particularly well-preserved baby specimen and squeeze liquid blood from it. Expect to see clones of this beast pop up at a zoo near you in the next decades! While here get yourself a bookmark with a snippet of mammoth fur embedded in it, or get one for your dad for Christmas anyway! Of course, there is one of these, and it is on Lenin Boulevard so you will have no trouble finding it.

The local Vlad statue has the big man high on a plinth and gesturing forward with his hat in hand, a very animated statue indeed! In summer the square gets full of old folks sitting around, families playing games, the occasional mini-funfair, young people flirting, all manner of daily life.

A great place to hang out, soak up some local colour, spend some time! 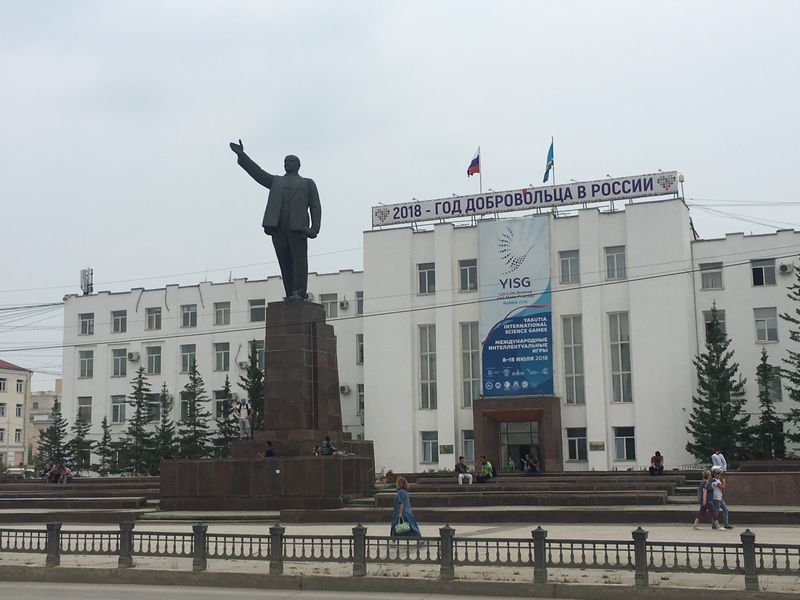 Directly to the south-east of Lenin Square is the old quarter; some genuinely old buildings and some reconstructed old-style buildings can be found in this quiet part of the centre.

It is well done and has not too much of the ‘new old town’ feel that some places manage to make when they rebuild their heritage areas.

Within the old city you can also find some more recent structures of interest, such as the Cathedral of the Transfiguration (with some very gruesome murals inside), the Monument to the Unknown Soldier, and the very interesting Monument to the Founding of Yakutsk, a statue of the Cossack founder of the city, Pyotr Beketov; looking suitably heroic

Housed largely in a rebuilt fortress tower, on the site of the original fort of Yakutsk from the 17th Century, this place does an excellent job of displaying maps and designs of various buildings to give a sense of how the city developed from a garrisoned fortress into the major city it has become today.

At the eastern edge of town is this large and very well laid out WWII memorial park, of course, all Russian cities have one of these but this one is a particularly interesting visit. Used by many locals as a spot to wander and relax as well as for kids to play on the tanks on plinths here. There is an impressive central monument in the Yakutian Style, with rows of markers for all the hero cities of the USSR. Well worth a visit as much for the people watching as for the monument itself. 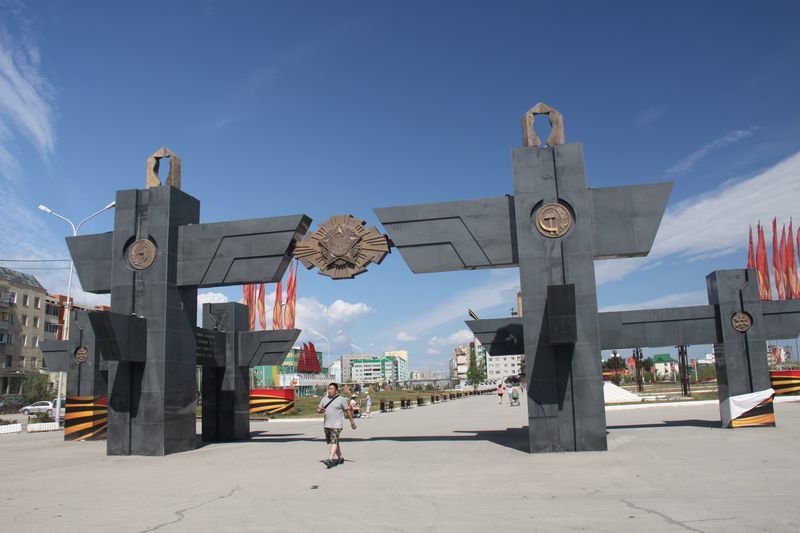 Just outside of the city, about 4km from the centre to the east is this quirky and fun spot, built into a steep hillside here is where you can enter the permafrost itself; wrap up in a warm coat (included in the price, don’t try to be a tough guy and go without, it is cold indeed inside!) you enter a system of artificial tunnels with various ice sculptures inside, some of them are relevant to the area (ice mammoth for example), some of them are generic (ice slide, vodka bar) and some are a bit odd (come and see!).

Here you will learn nothing about permafrost, but it is fun and makes for great pictures for sure.

Just down the road from here is the excellent Yakutian Restaurant Chochur Muran, a very large wooden building with a helicopter parked outside, try the raw frozen fish and horsemeat here as well as some local beer. Yakutsk is a large city but visitors will generally stick to the centre, which is very much navigable on foot (if you need to get up and down Lenin Boulevard you could always just jump on a bus, it's obvious which way they are going). From Victory Square to the Old City is about as long a walk as you would do in one go, and that is around 2km.

There are any number of shops, malls, cafes, bars, along the way. Lots of things to see and do for sure so lace up your boots and get out there! 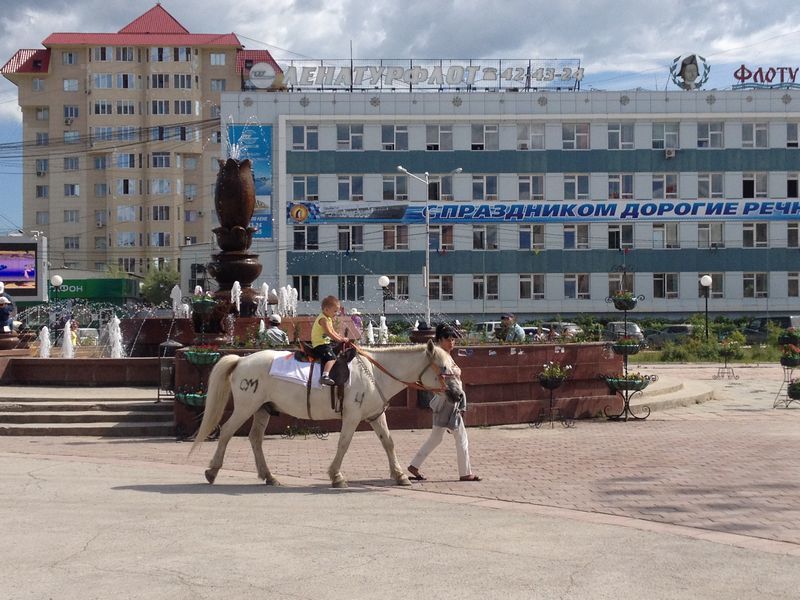 Being a major city means that there are a lot of options here, from not bad to very basic. Some of the better options would be;

Hotel Lena: our favourite hotel in Yakutsk; located on Lenin Boulevard so a good spot for walking to anywhere in the centre. on the final (or first) km of the Kolyma Highway. Tiny elevators, somewhat retro but clean rooms, souvenir shop, decent breakfast, easy to find and fitting in with the general vibe of the town. Has a pleasant small bar too

Polar Star Hotel: Part of the Azimut Group of Hotels (commonly found across Russia) this location is hard to beat, right by Lenin Square. A bit fancy (even though it looks dated from the outside) and still a chain hotel, but one of the most comfortable options in the city for sure 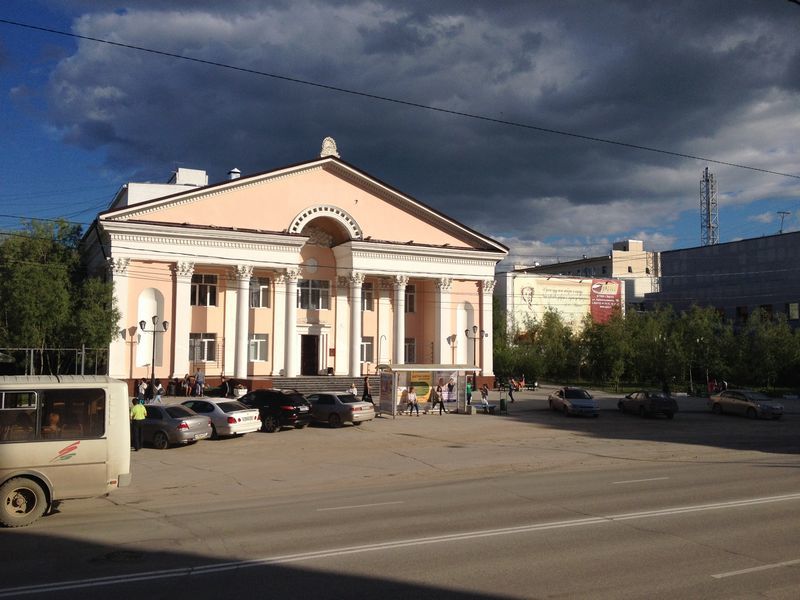