The Potanin Glacier is a glacier found within the Altai Tavan Bogd national park area, one of around 35 glaciers in the region.

The Potanin Glacier is the largest amongst the glaciers found in the park estimated to be approximately 20 – 14 kilometres long and 2.5 kilometres at its widest point.

The Glacier descends to an elevation of 2,900metres huge moraines surround its base. Water from its melting ice flows runs down into the Khovd River basin. 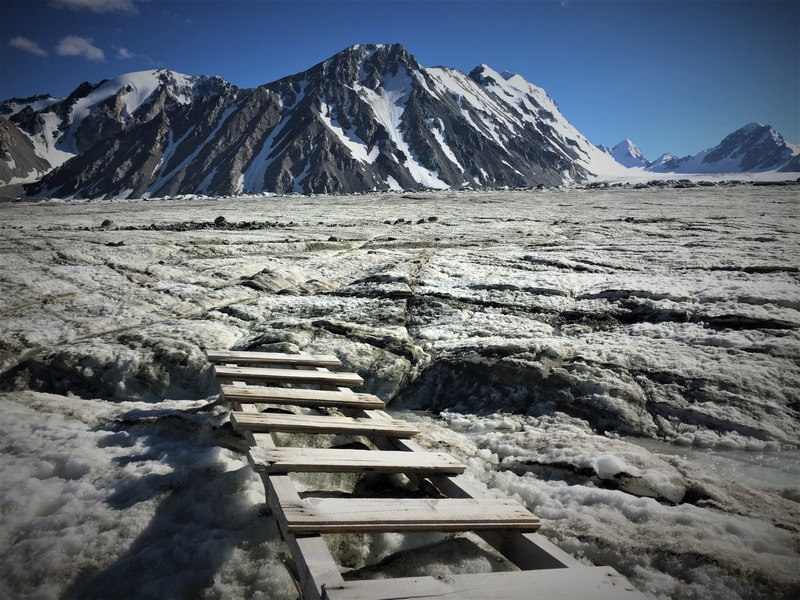 The Potanin Glacier lays within the protected area of the Altai Tavan Bogd national park.

The national park encompasses a large section of the Mongolian Altai Mountain Range which stretches across the south-west part of the country.

The highest point in the mountain range is the Tavan Bogd peak from which the Glacier draws much of its source material.

How the Potanin Glacier Got its Name

The Russian botanist Vasilii Vasil'evich Sapozhnikov discovered the Glacier in 1905 whom in turn was to name it after the Victorian-era explorer Grigory Potanin.

A famed explorer Potanin was also an accomplished ethnographer and natural historian. As well as his research, Potanin also campaigned for Siberian independence from Russia, earning him five years in a gulag.

Potanin had been one of the first to map and traverse these inhospitable regions leading expeditions across Mongolia and the Altai mountains in 1876.

How to Get There

If unpaved, bumpy and none existent roads are not for you don't go!

A 4WD vehicle is a must along with an experienced driver who knows the area. There is usually snow present until the end of May. The best times to visit is from June through to September.

Outside the summer months, do expect Avalanches, heavy snowfalls and landslides to occur at any time. During the summertime temperatures can still reach 0c, and snow may fall in the upper reaches, so be prepared. The summer months can cause a few problems. As it is also the rainy season, sudden heavy rains can cause the white river to burst its banks, making the road become mud-soaked and challenging to traverse.

If visiting just the Glacier, we would recommend a four-day visit, although three days is possible, it raises some driving-related safety issues. The drive to the national park entrance from Ölgii city will take around 6-9 hours depending on the weather conditions.

Once at the park entrance, you can camp or stay with one of the Tuvan families. The following morning depart at dawn to allow the afternoon for glacier exploration.  The aim is to make it to base camp which is around a six hours walk uphill or three hours by horse.

Base camp is where you will need to camp for the second night, from here people also venture further aiming to climb the nearby Tavan Bogd mountains.

For Glacier explorers, it means an adventurous walk over the moraines which are a lot bigger when you come to climb them.

It will take around one to two hours to the Glacier and back. Standing at the edge of the Glacier is a truly awe-inspiring moment as you can hear the noise it makes craking and moving. In some locations, one can even hear the tremendous roar of the deep under-ice rivers.

It is possible to walk on the Glacier, but this must only be done with a very experienced guide as the Glacier is pitted with cracks and deep underground rivers.

After staying overnight its back downhill to the park entrance as the journey back will take around four hours hiking.

We would recommend camping halfway between the park and Ölgii city to rest the driver.

We would recommend a visit soon as with many other glaciers around the world, the Potanin Glacier is slowly decreasing in size.

It is estimated that over a 6-year period the Glacier has retreated by about 90 metres. As we have explained above a visit during the summer months June to September is best using excellent guides, drivers and back up team.

The area will better when visited as part of a more significant tour encompassing the whole region. 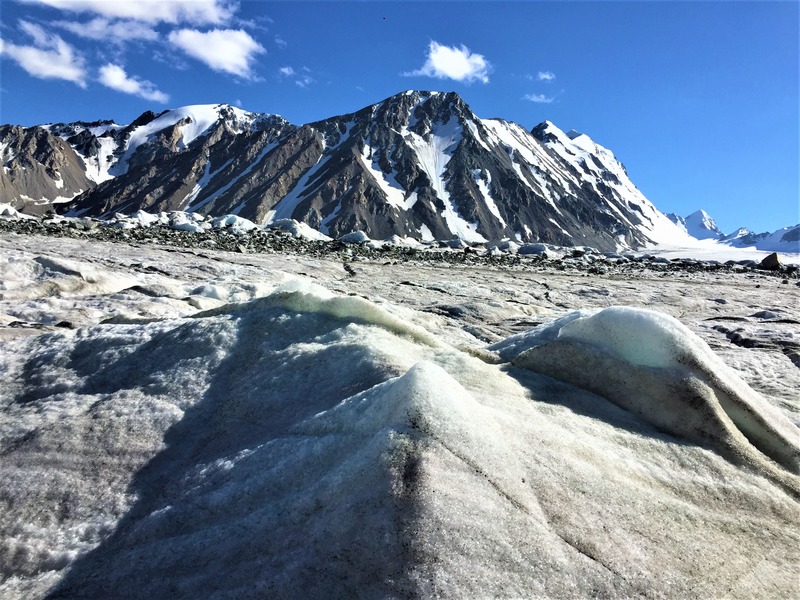