Myaundzha is the nearest inhabited settlement to the amazing ghost city of Kadykchan, just a half-hour or so away on the Kolyma Highway.

When say ‘inhabited’ what we mean is that it is only party abandoned, the population having fallen from a height of just over five thousand, down to as little as 1500 people these days, with the decline continuing and with no end in sight for this town.

Founded in 1950, so fairly late in the day as towns in this area go (most of them starting life as 1930s constructions by Gulag prisoners), Myaundzha exists because of the proximity of the Arkagalinskaya Thermal Power Station (there also used to be a Uranium mine nearby, worked by prisoners initially and free workers afterwards), which keeps the locals in jobs.

They will of course have seen how Kadykchan went from vibrant town to ghost town and be aware that they may be next; a sword of Damocles situation really. 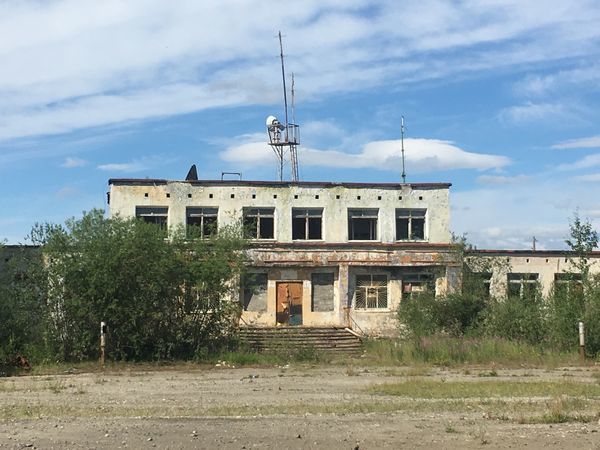 The main reason for making a visit to Myaundzha as a tourist is twofold.

Firstly the internet works there on Russian cellular networks so a stop to send messages, post photos, etc can be done.

Secondly, it is where you would stock up on supplies for a stay in Kadykchan if that hadn’t been done already.

If stopping in Myaundzha for Instagram or instant noodles though do take a bit of time to walk around, and especially to pop into the abandoned House of Culture.

This is a beautiful building, partly collapsed but still strikingly built, a real loss to the town and sadly many more of the buildings here are in a similar state.

How to get to Myaundzha

Myaundzha is a mere 15km from Kadykchan, but the roads in and out of both places are terrible.

Allow at least half an hour for this journey.

From Magadan, it is around 600km and from Susuman 90km, so around 2 hours.