There are no weight categories, no age limits, no time limits and not set confines of a ring.

Many experts believe that Mongolian wrestling has been in existence for over 7000 years.

Cave paintings uncovered in Bayankhongor Province from the Neolithic period tend to support this. These paintings depict two men wrestling surrounded by crowds.

Over thousands of years, wrestling would have gone through many changes, although the wrestling we view today would appear to have originated in around the 12-13 centuries.

Like the other sports celebrated during Mongolia's Naadam Festival, wresting is considered one of the three manly games and traditionally it would have been a way to test one's military prowess.

The Mongolian wrestlers wear heavy boots (gutuls), tight-fitting shorts called a zodag and a tiny jacket akin to a long-sleeved waistcoat that doesn't meet at the front; this is called a shuudag.

Many people wonder about the smaller style of clothes. There are two reasons.

The clothes worn are strengthened with lengths of rope which provide strategic areas to grip one's opponent.

As with many reasons for things in Mongolia for the second, there is a story attached.

Legend has it, that many years ago during a particular Naadam, one champion went on to claim victory over all others in Mongolia. Upon steepening up to claim their prize, this champion then revealed themselves to be a woman, much to the ire of all of the male contestants.

It was then said that the traditional Mongolian wrestler's dress designed to prevent further embarrassment. The tight-fitting waistcoat would always reveal a woman's breasts should she attempt to enter. 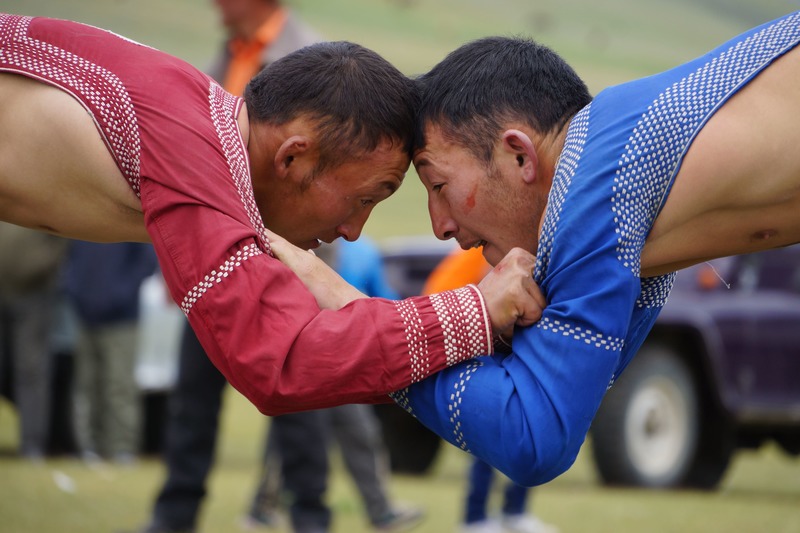 With no set boundaries, weight categories and many hundreds competing in a wrestling match at one time to the uninitiated a wrestling contest in Mongolia can at times appear quite confusing.

But there are some quite strict rules when it comes to wrestling. For starters, the amount of contestants wrestling will always be in multiples of eight. Naadam in Ulaanbaatar will always have 512 total contestants.

Mongolian wrestling is a single-elimination affair. As soon as you have lost your bout, it's out you go simple!

Wrestlers start by entering the field appearing to leap, dance and wave their arms. This is an honorary affair representing the eagle. This will start and end along with respects being offered to the Mongolian flag.

At all times there is a referee at hand as well as an assistant who will hold the wrestler's distinctive velvet pointed hat.

When fighting, there may be as many as six other fights taking place at the same time. The aim is simply to knock your opponent off balance or to throw him to the ground so that his elbow, knee, or hands touch the ground.

The loser will then pass under the victor's arms as a sign of respect. The winner will once more perform the eagle dance around the flag as well as receive a token prize of biscuits and dried curd; he will then make the gesture of eating before offering them to the crowd.

As the bouts move on, so does the prestige with title offered along the way:

There usually are nine rounds of fighting, leading to the final event.

Beats five opponents is known as the Falcon.

Beats seven opponents is known as an elephant.

One who wins the event is known as a lion.

If a wrestler wins 2 Naadam two years in a row is known as a Giant.

If a wrestler wins three years in a row, he will have the title Nationwide Giant.

Finally, if a wrestler wins four years in a row, he will be known as invincible.

As well as the honorary title prizes are also awarded depending on the area although it is said that a wrestler only performs for the honour of winning. It's worth noting though that last year a brand-new land was rover discovery on offer for the winner! 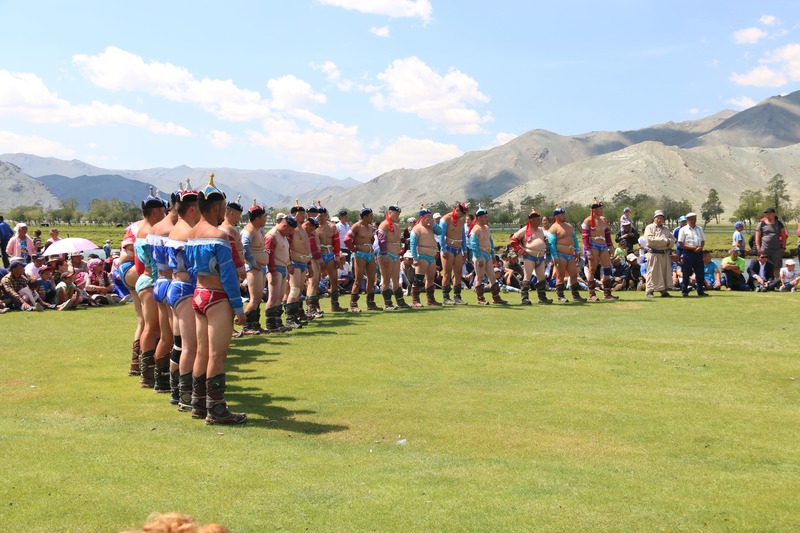 Where to See Mongolian Wrestling

These are generally held in the wrestling palaces in one of the major city or town hubs usually to celebrate Mongolian New Year or other big holidays such as Independence Day.

Koryo tours hold a tour visiting a local Naadam festival each year as in our opinion the local events are a lot more entertaining and traditional than those contained in the capital Ulaanbaatar. You can join us as we attend and cheer on some of our friends in the competition.

many people see it as being a lot more. Wresting in Mongolia is believed to incorporate spirituality the ideals of nobility, strength as well as being physical.