For fans of abandoned cities, there are many amazing places in the world to visit to get a glimpse of the end of civilisation. Some of our favourites would be Plymouth (Montserrat), Agdam (Nagorno-Karabakh, and Priozersk (Kazakhstan) – plus obviously Pripyat (Ukraine).

Our very fave though is somewhere vastly more remote and lesser-known; the amazing Kadykchan, far along the Road of Bones and deep in the interior of Magadan province, the far North East of Russia. 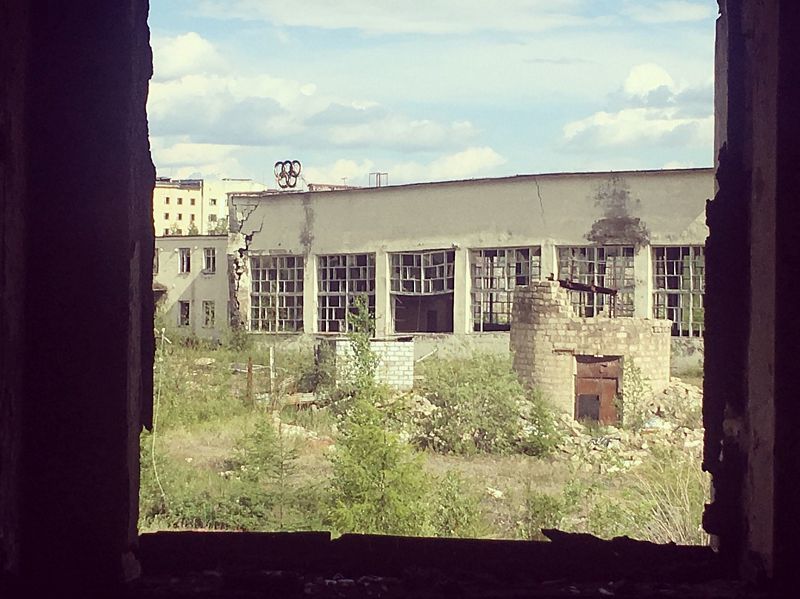 By road from Magadan, Kadykchan is around 600km away, Google Maps will tell you this is 10 hours, that’s not even close. It would take all day, around 14 hours minimum to get there. Best to drive first to Susuman, stay overnight, then drive the 90 mins remaining to Kadykchan the following day 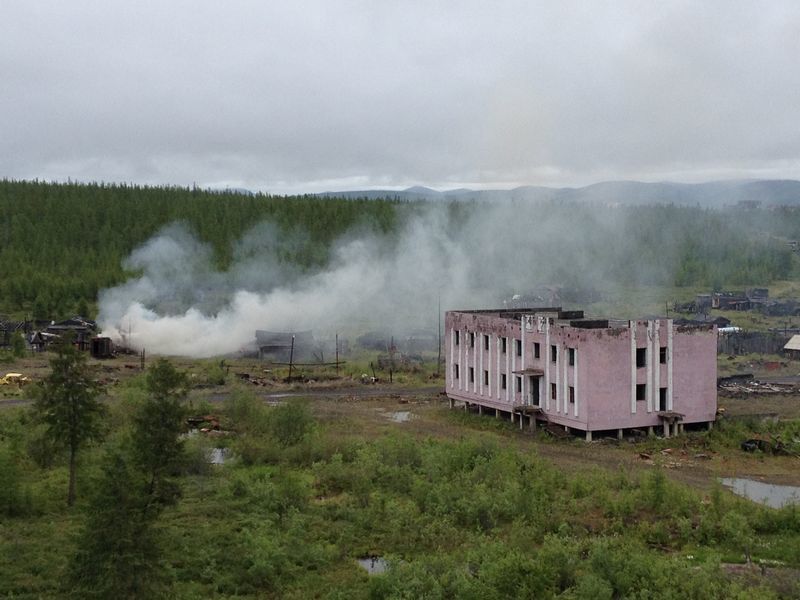 There are zero extant facilities. You have to bring all that you need for food, drink, sanitation, cooking, sleeping, etc. The nearest shops are in Myaundzha, about half an hour away by car.

take your choice of apartment! There is no functional furniture though so a sleeping bag, mat, etc is needed. We advise using either one of the school halls (which still has some wooden slats on the floor; more give than sleeping on concrete) or sleeping on the school roof. It won’t be the most comfortable night, but who came here to sleep?

If sleeping rough after the world ends is not your thing then you can drive back to Susuman, the nearest town of any size, this would take about 90 mins. 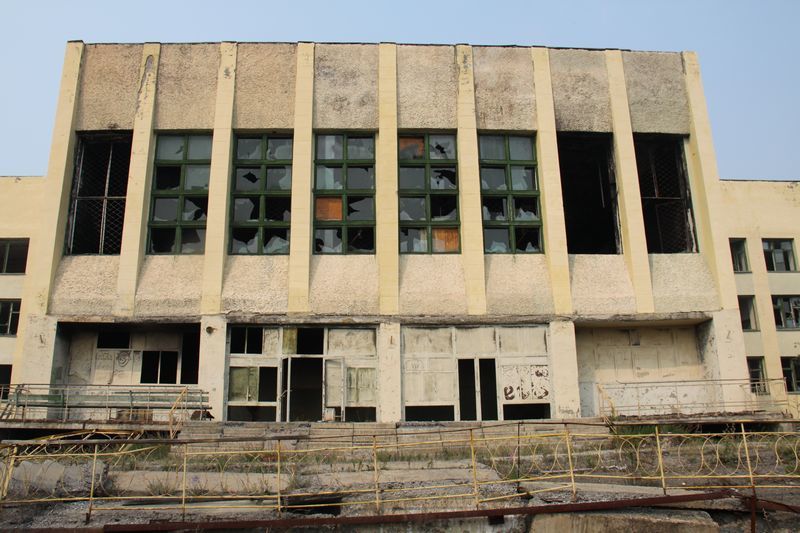 Kadykchan was initially built by gulag prisoners in the 1940s, including the famed author and gular chronicler Varlam Shalamov, as coal had been discovered in this area it was seen as a viable site to place a settlement.

Originally prisoners but then free workers began to appear and the town become a proper settlement, albeit one that relied upon a single industry to remain viable.

Kadykchan's population grew to over 10,000 in the glory days of the town, the 1970s and 80s, perhaps insulated from some of the reforms that swept the west of the USSR before reaching the factory towns of the east.

With a young and active population it must have seemed that Kadykchan had a bright future, but with the collapse of the Soviet Union in 1991, the beginning of an economical and social collapse, and then the exhaustion of one of the two mines that he town relied upon for employment the end was suddenly much nearer than anyone has anticipated. The population began to bleed off as jobs and income became scarce, then in 1996 a methane explosion in the remaining mine caused a number of fatalities and led to the mine’s complete closure.

Some of the population hung on as late as 1998, 500+ folks were registered as living in Kadykchan in 1997 after all, even with no income, no mine, no jobs. But when the government cut off all remaining utilities life in the far north became impossible and the last hangers-on were forced to leave, some buildings were torched (not particularly effectively) by the authorities, and the evacuation was completed.

From Gulag site, to pioneer city, to deserted ghost town in less than the span of a human life; this is the story of Kadykchan. 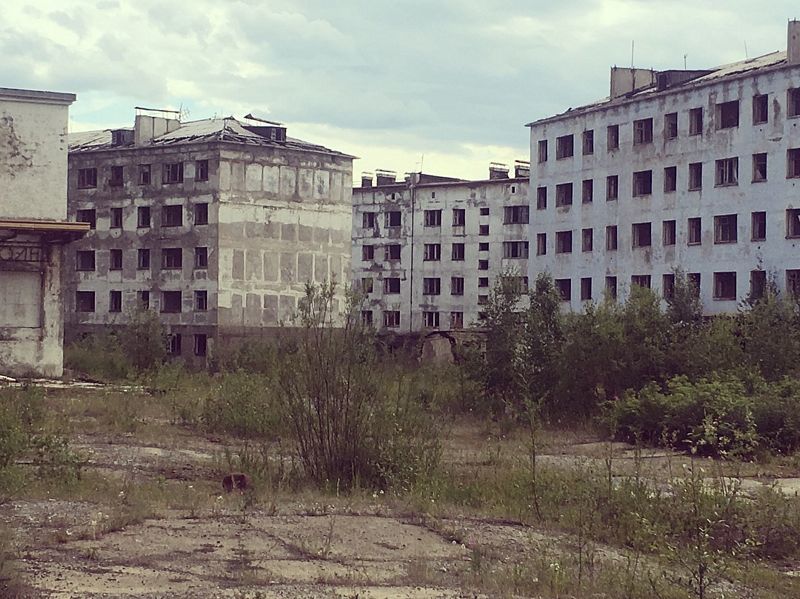 A visitor to Kadykchan today is not going to experience an inhabited place, everyone is long gone and the only remnants of homo sapiens you may encounter are the occasional asset-stripper coming in to get a hold of some of the valuables left behind; copper wiring, wooden flooring and roofs, even some of the pipes beneath the ground. If you are there looking for treasure then you are not looking for the same stuff as them so you will mean each other no harm! Mostly these guys come in from the nearby town of Myaundzha, itself about 80% abandoned, so a relative bustling metropolis!

Kadykchan needs at least a full day; it is the perfect abandoned city in that it is large enough to spend a lot of time in and have a lot of amazing experiences, but also small enough that you can know where you are and get back to meeting points with ease, also it is quiet…really quiet. If you see someone in the distance and want to call to them you barely need to raise your voice. It's spooky how quiet the place is, really.

Where to start on an exploration? As you drive into the city from the Kolyma Highway you will pass a stream to the west of the urban settlement, on the other side is the abandoned coal mine and the industrial buildings that made up the area’s main employer. This area can be reached by crossing a bridge that has mostly fallen into the water, be careful here (in fact be careful everywhere, its all very run-down, take a whistle, tell someone where you will be, don’t go off alone. A responsible company will advise you of all this over and over in advance). You can’t go in the mine itself (don’t even think about it) but here there are abandoned vehicles to be found, larger buildings that housed the mine admin and machinery, various chunks of metal that used to do something, and so on. It is worth an hour or two for sure and would be an amazing setting for a zombie movie! 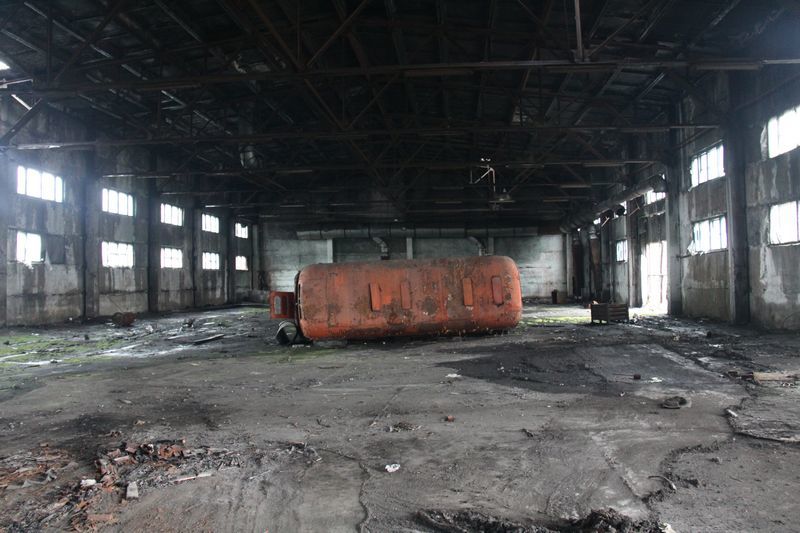 Back to the town, the first place you should go to is the House of Culture; this is the centre of town and in front of it is a bust of our old friend Vladimir Ilyich Lenin. It has been shot to pieces by the last few people who left the city, displeased at the result of Lenin’s Legacy for them. This makes for amazing photos as well as being an ideal meeting point! 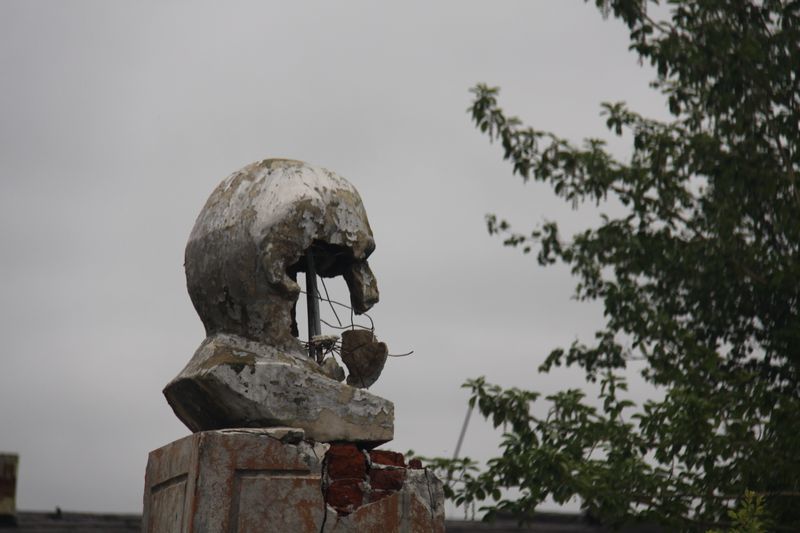 Around the House of Culture are the main non-residential buildings. A primary school on one side, the old cinema (which is very collapsed, the projectionist room can still be reached), sports centre (part of the main wall here will not last much longer, we recommend not going into this building), as well as a clinic too. A little further north stands the 3 storey secondary school. This is an ideal place to use as a base as the roof is in good condition and is easy to reach, when the mosquitoes die down at night and if it is not raining then sleeping on the roof is a great idea, see more stars than you ever imagined!

This school also offers good plunder, as the residents here had time to take what they wanted all their actual valuables have gone, but they all seemed to leave behind their Lenin and Marx books (perhaps bequeathing them to a future generation? Or maybe they had read them already!) plus records and other ephemera. The school has some good bounty and is especially good for photos. Make sure you explore this place properly. 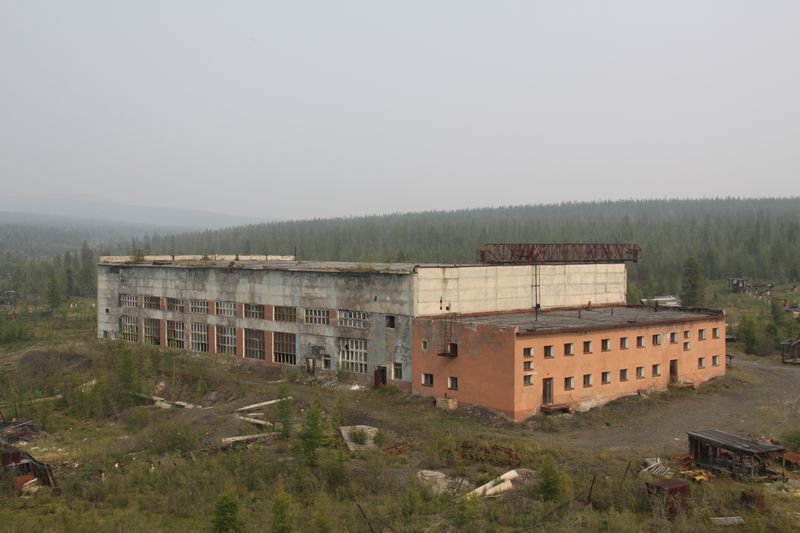 From the roof of the school look to the south, you see a dacha area, with small huts and overgrown gardens, it is a fun explore but it is very swampy so after rainfall is very tough to cross, behind this is a concrete tower that made up a training tower for the local fire service, this can be climbed and offers great panoramic views if you can get to it!

Also visible from the school roof to the south-east is a small pink building; the City Administration. Here you can find the archive which seems to have been left behind completely. We’ve seen ID cards, bank statements, maps of the city, population books, all kinds of good stuff here, and in surprisingly good condition too. The meeting rooms upstairs still have wonderful wooden and glass decorations on the walls. 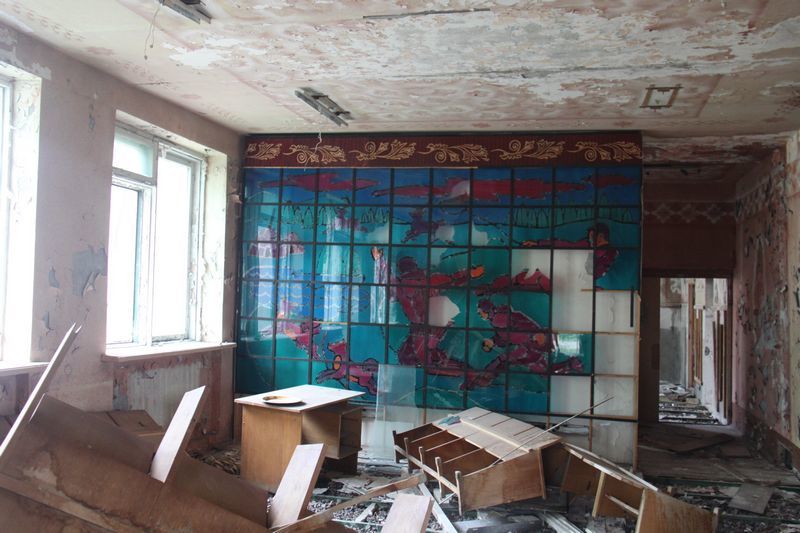 Shops, of course, existed here and can be found in the ground floors of many buildings, the majority of the structures are for dwelling though, 4-5 stories as standard (but with some variation) and with the roofs being accessible too.

Most apartments are accessible and some have broken furniture, some have old toys, books, etc. Some have clearly been used for the more base of human needs in the absence of anything that flushes, so tread carefully!

Some of the ground floor apartments on one side of town appear to have been reinforced and there are stories of gangsters coming in to build narcotics producing facilities and getting into shootouts with the feds! Who knows how true this is - at the end of the world who knows how true anything is!

Some of the buildings have basements; do not go in there. The structures are not sound even though they were built to last, many have been flooded and are way out of reach, don’t even try!

There are garages and abandoned cars, sheds, cottages, and some incomplete buildings, gardens, greenhouses, and all kinds of structures to explore. If you love this kind of thing you will be in utter heaven; if not you will wonder what on earth you are doing in such a place!

Kadykchan really is the utter peak of abandoned city exploration in our opinion, it is remote, a pain to get to, a pain to be at, but you will never forget or regret a trip here. Get a good souvenir and treasure it as it reminds you of the epic adventure you went on to get it! 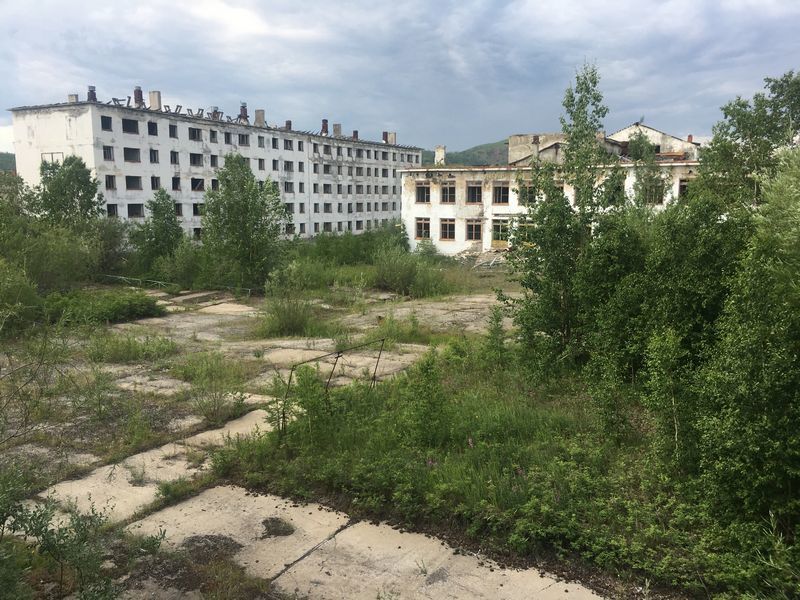 There is a fascinating article here about Kadykchan, featuring one of its former residents, very much recommended reading! 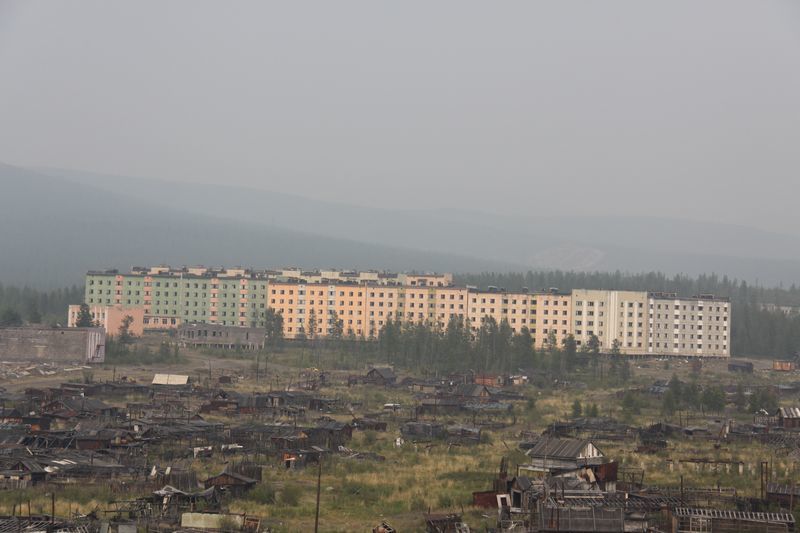