As the name suggests, this particular Genghis khan statue involves him riding a horse, although what may not be entirely clear is that it is big, real big 40 metres big to be precise.

The Genghis Khan equestrian statue is so big visitors can enter into it and view differing areas. Such as the viewpoint, museum, souvenir shops, or even grab a cup of coffee. 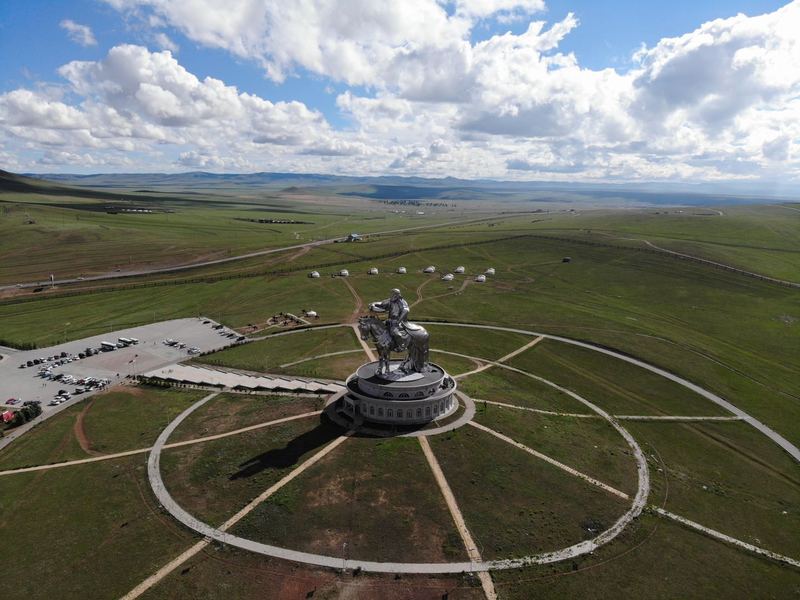 History has it that the current site of the Genghis Khan Statue Complex is where this legendary leader discovered a golden whip. The whips discovery was seen by the people of the time as an omen of power, luck and fortune. Back to modern times and the statue complex was completed to allow visitors in 2008. The complex is facing to the east from where Genghis Khan was born.

The Genghis Khan Statue complex cost was said to have exceeded 4.5 million USD although as the site seems still not completed, it will likely be more. The project was paid for by the Genco Tourism Bureau, a Mongolian company owned by the now Mongolian President Khaltmaagiin Battulga. Battulga named the company after a character and company from the Godfather movies.

When fully completed, it is said that the central statue is to be surrounded by 200 gers laid out in the shape of a historic horses brand. There are also plans to add a luxury hotel complex, golf course, theatre and even an artificial lake with a garden. The full site covers a total area of 212 Hectares with spaces planned for the formations of traditional Mongolian gers, to the west there are some smaller statues of Mongolian warriors which are worth a look.

The 40-metre statue of Ghengis khan is made up of two hundred and fifty tons of steel and sits atop a visitor centre, making the total figure even taller in appearance. Within the centre, there are 36 pillars, one for each of the great historic Mongolian Khans.

Upon entrance, the visitor is greeted by the site of a giant leather Mongolian boot as well as a replica of Gengis Khans famed golden whip.

Either side of the entry point are souvenir shops selling all one needs, cheaper alternatives can be found within Ulaanbaatar, but the quality is good here. You can say you brought peoples gifts from within the Largest Genghis Khan statue in the world.

On the second floor is a restaurant and coffee shop, from personal experience the coffee offered, is only instant and tastes terrible. The restaurant does appear to have a good selection of traditional Mongolian meals on offer although the service is prolonged.

In the basement is the museum which has exhibitions with artefacts dating from as far back as the Bronze Age and for those who like a little more knowledge its perfect.

However, for most, the highlight of the visit is taking the elevator (or walk), to the viewing platform atop Gengis’s horse. Strangely all visitors emerge from the crouch of Genghis khan which opens out onto a gantry leading to the top of the horses head.

The views of the surrounding countryside are awe-inspiring. 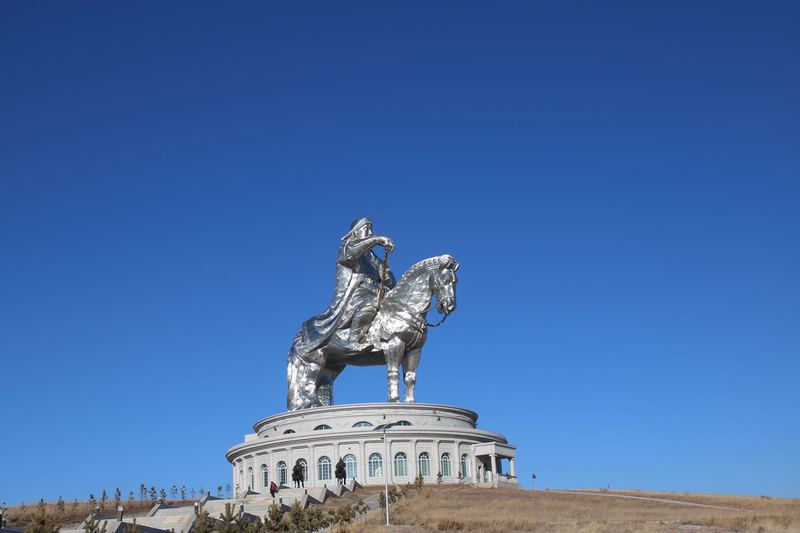 Getting there from Ulaanbaatar

At 54 KM from the capital most guide books and travel writers that have never been to the Genghis Khan, Equestrian Statue will tell you that the drive is 1 hr; whereas in reality due to the traffic conditions in Ulaanbaatar, we would always estimate 1.5-2 hrs if not more.

When visiting the statue alow 1-2 hrs visiting time, in the summer months this may be longer due to ques at the to[p of the statue.

During the winter months do take care as ice on the stainless steel walkway does tend to be very slippery.

Unfortunately, the elevator does not go all the way to the top, and there are still some steps to traverse, making the statue none wheelchair friendly and difficult those with further mobility issues.

When visiting the statue, you may notice at the base people offering one the opportunity to pose with eagles; This, of course, comes at a price, and we would strongly discourage taking pictures with these guys.

No matter what the touts tell you, they are not real Kazakh eagle hunters and the eagles are kept solely as tourist traps.