The more popular amongst overseas visitors associated with this now-famous Gobi tour site is the Flamming cliffs. They are renown for his beautiful colour and palaeontological finds.

If you're visiting the Gobi Desert be sure to make a stop here. 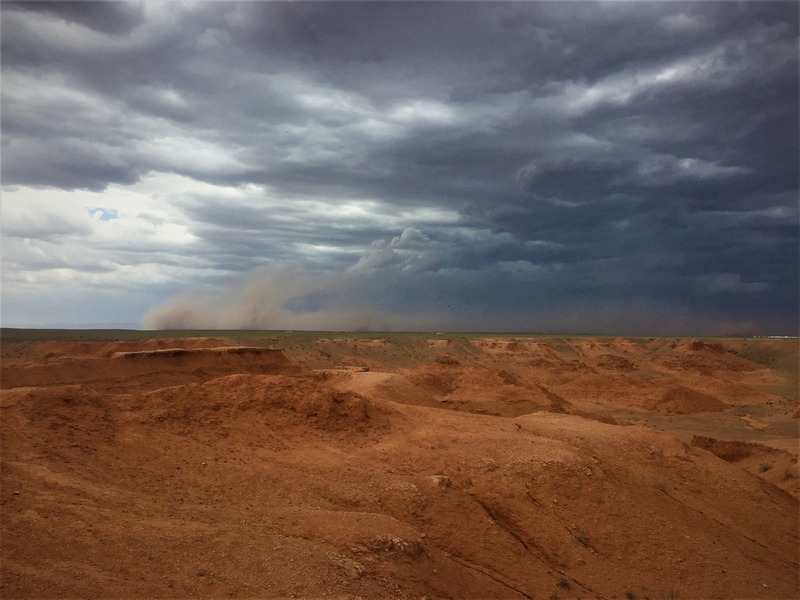 The flaming cliffs are located around 100 km northwest of Dalanzadgad near to the small desolate village of Bulgan Village.

Roads will only get you so far as from Dalanzadgad, only around 60% of the journey can be made on the tarmac. Out here there are no signposts, so its good to be sure that your heading in the right direction.

About the Bayanzag Flaming Cliffs

The name Bayanzag means rich in saxaul bushes. An odd name we know, but that's pretty much all that seems to grow in this area.

During prehistoric times this whole area was covered by dense forests (not the spindly trees now present). The forests that grew here were visited and inhabited by many species of dinosaurs which would 230 million years later bring fame to the area.

Bayanzag was to be made famous when visited by the explorer Roy Chapman Andrews upon his arrival he was to name the area as the flaming cliffs.

The reason for Roy Chapman Andrew's visit was to unearth Bayanzags, early prehistoric history, and he did just that. Andrew's discoveries included the world's first fossilized dinosaur eggs, petrified forests, and early mammals. Many of Andrew's finds now not only adorn museums in Mongolia but worldwide.

Roy Chapman Andrew's also discovered that over millennia the woods once here were preceded by a vast receding ocean.

It has been speculated that Andrews was the real inspiration for the movie character of Indiana Jones. It has to be said though that neither George Lucas or the other creators have confirmed this (nor denied).

Visitors these days find very few fossils but do see the flaming cliffs to be stunningly beautiful. Bayanzag lays the desert out beneath your feet great for those who enjoy photography.

The best time to capture the cliffs at their most attractive is sunrise or sunset. The hardened clay soil, mostly unchanged since the Cretaceous period, is set ablaze showing brilliant shades of reds and orange.

Getting to the Bayanzag Flaming Cliffs

When Roy Chapman Andrews visited he did so with over 70 camels, you will not need them these days, but a sturdy 4X4 will be perfect for the job. Travelling with a tour company is advisable as the drivers know the region and guides can translate as well as giving all the facts and figures.

If visiting here, it is possible to camp in the area or use one of the well-appointed Ger camps nearby.

If you plan to use the Ger camps, we recommend booking early as during peak times June/ September they can be very busy.

There is no public transport to this destination so plan well ahead.